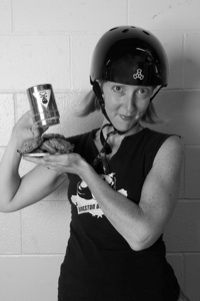 Skate at Home Mom is one of the founders of Kingston Derby Girls and skates for the Disloyalists.  She has lived in Kingston all her life: her first job was slinging fries at Kingston Canadiens’ games, so she’s thrilled that KDG calls the Memorial Centre home. She is constantly blown away (but not surprised) by what a determined group of 60+ women can do, and proud to work and play with the most incredible women in town.

1. How long have you been roller skating/derbying? Do you have any experience playing hockey or another contact sport? What inspired you to establish the Kingston Derby Girls and bring organized league play to the city?

Besides very recreational skating as a child, I have only been roller skating for about a year and a half. I got my skates for Christmas of 2009 and skated outside my house on the street until our first practice on April 29, 2010. I have never played hockey or another contact sport. In fact, aside from a very short stint with baseball when I was about 12, I have never been involved in any team sports at all until now. I read an article about derby in Bust magazine, probably in about 2006, which inspired me to investigate whether or not there was a league in Kingston. There wasn’t, and a few friends and I tossed around the idea of starting a league, and asked around to see if there was adequate interest to start one. We found many people were interested, but had little luck finding a venue and didn’t know where to start to get the requisite insurance to start skating. We were really excited by the possibilities but overwhelmed with the work required to get things going, plus many of us had small children and babies, which meant our time and energy were really limited. We decided at that time not to pursue it, and I kept hoping to see a sign-up sheet somewhere so I could get involved with someone else’s league. Fast forward to 2009, and there was still no roller derby in Kingston. Our children all a little bit older, LaVallee of the Dolls and I (along with our co-founder, Emi Lou Shiner) decided to jump in and give it a go. We hoped for initial registration of 20 women to cover our rink costs, and had 66 after our four hours of registration. Kingston was ready for roller derby and we hit the ground running to create a fun, competitive and sustainable league that was bigger and more popular than we had ever imagined.

2. It seems as though the Derby Girls are everywhere we look. I’ve seen them rolling down the street during Canada Day festivities, the Pride Parade and later this month we’ll see them at the Princess Street Promenade. How important has community involvement been to marketing the KDG and attracting new talent?

Community involvement is very important to KDG. We are lucky enough to have thousands of dedicated and amazing fans, and we have all been supported by friends and family and our community. We have enjoyed such success at our two bouts so far that we really feel that it’s important to us to give back to our community by linking with other community groups in whatever ways we can. Sometimes that is through donating money to groups we feel reflect values that are important to our league, and sometimes that is through participating in community events like Relay for Life or the Pride Parade, to name just two.

3. What are some of the biggest misconceptions held by new players? How physically demanding is flat track roller derby, and what tips do you offer rookies?

I find our new skaters generally know what to expect, although for sure the first time out in a real scrimmage can be a surprise. After months of fresh meat camp, where they do drills and endurance training, many of the skills are there, but regardless, the first time in a full scrimmage with more experienced skaters can be a surprise. It is fast and rough out there, but all of our skaters are well prepared by the time they come up to that level. Derby is really physically demanding – it takes a lot of physical strength, balance, endurance and general athleticism and fitness. Recognizing this, we spent our entire off-season (December to March) being trained off skates on core strength, agility and cardio. We just participated in a full-day tournament last weekend, and after five or six hours of intermittent bouting, we were exhausted – it is really important that skaters bring a high level of fitness and commitment to the track.

4. Do new derby girls get to select their own names, or are they picked for them? How did you come up with your roller derby name? What other names and alter egos were you considering when you were establishing your persona?

Once skaters have passed their Minimum Skills Requirement tests (MSRs), they are considered full members of the league and are eligible to be drafted to a team. At this point, they can pick their derby name and we will register it for them with the international roster of derby names. It is no easy feat to pick a unique name – there are more than 30,000 names registered with the international roster and you may not pick one that is the same, or even similar to, another derby girl’s name. My own name was the first one I thought of and after that I didn’t spend anymore time thinking of other options – it just fit perfectly and it was available – I lucked out!

5. Which position do you prefer, and what is your signature move on the track? What roller derby accomplishment are you most proud of?

I prefer to be a blocker on the track, and the accomplishment I am most proud of is passing the enhanced MSR test, enabling me to play with the Disloyalists, KDG’s travel team. The enhanced test involves being able to skate a little faster than the basic test and exhibit another couple of skills at a higher level. I did not think that I would be able to pass that test, and to do so was a very pleasant surprise.

6. What have been some of the greatest challenges, on and off the track, you and the Kingston Derby Girls have faced during the first year of operation? What’s been the key to your success thus far and how do you plan on ensuring continued positive growth?

The greatest challenge we face, I think, is in a sense, our own success – we were such a big league so fast, and our fans (2,300 strong at our first bout) were so enthusiastic, we felt, and feel, a real sense of commitment to excellence. We want to provide the best derby experience possible for all our skaters and our audiences, but as we’ve all learned, it is actually impossible to please everyone all the time. So we’ve tried our best to move forward in a manner consistent with the vision of the original founders and in a way that provides our skaters with a really fun, challenging and competitive experience and our fans with the best derby we can show them. We also continue to face the challenge of not having a year-round venue in which to train – other cities are skating year-round, and it shows in their learning curves. We are desperate to find somewhere that we can skate and train 12 months of the year – this would catapult us onto the main stage of roller derby in this area, without a doubt. Our off-season training and commitment to learning the game have gone a long way: the derby you’ll see us play this year as we bring other cities into Kingston is miles ahead of the derby we showed Kingston last year. We plan to continue working hard on our physical fitness and game skills and strategies, and have wonderful relationships with leagues in other cities who offer us tremendous support and guidance. We have also formed an incredibly close and cohesive league and the sense of commitment and cameraderie that comes along with KDG membership ensures that we will continue to be a success story in Kingston and beyond well into the future.