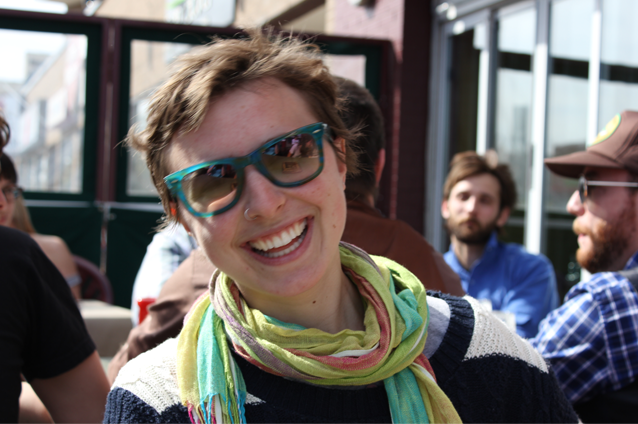 Emily Murphy is a relative newcomer to the food scene here in Kingston, but her family is not! Her mother owned a restaurant for several years as she was growing up, her uncle is the owner of Coffeeco and Mulitatuli Coffee in the city, and her grandparents owned the former Kingston restaurant Salmagundi. Now, Emily is stepping out to fill the shoes of Kingston by Fork’s owner and founder, Julia Segal. Kingston by Fork, a company entering its second summer, offers culinary tours of downtown Kingston! Though a student entering her fourth year at McGill University in Montreal, Emily has, for the past several years, enjoyed her summers in Kingston. Upon finding out that Julia was going to be away this summer completing her Master’s in Italy, she jumped on the opportunity to manage KBF over the summer. As the tours are now in full swing, she is so grateful to have the chance to share the wonderful food coming out of Kingston’s delicious kitchens!

1. What was your motivation to dive into food tourism and put local cuisine in the spotlight via guided tours? What makes the local scene right for food tourism?

I was born into a family that always had an interest in food and it wasn’t until I was on my own, cooking for myself, that I became really invested in what I was eating. Food is so much more exciting when you participate in it, which is what we try to do with Kingston by Fork! In terms of the business side of things, Kingston by Fork was founded last summer by Julia Segal upon her graduation from Queen’s. Kingston having the highest number of restaurants per capita in Canada, Julia was actually surprised, and for good reason, not to find a booming food tourism industry. So, combining her love of food and her experience as a tour guide at the University, she decided to establish Kingston by Fork. Add in the huge number of tourists that are in Kingston, and it just makes sense to have ways to introduce tourists and locals to the food scene!

2. What are the differences between the tours you offer, in terms of restaurants visited, sample dishes, historical stops along the way? Will either tour leave you stuffed, or do they simply tease the tastebuds?

We offer two tours, Homegrown Eats and An Edible Escapade, and they cover the local food scene in very different ways allowing people to go on both tours and not find repetition! Homegrown Eats focuses on introducing people to the local food circuit. We begin by introducing them to producers at the historic Public Market and end hoping to inspire them by including a 3-course meal at AquaTerra Restaubistro that has been locally sourced and seasonally inspired. The second tour, An Edible Escapade, is a tapas style tour that is heavy on sampling! We visit 7 restaurants, sample their signature fare, and learn about each location. Even though the tour does not begin until 1:30pm, we encourage tour-goers not to eat lunch beforehand because you feel extremely satiated by the end! Neither tour is a tease, you will definitely leave fully satisfied. (Haha)

3. Kingston is known for its locally sourced and seasonal cuisine. How does this important element factor into Kingston by Fork?

Kingston by Fork focuses heavily on locally sourced food, on community – that is really the base line of each tour. Even though Kingston is a city, there are systems in place, like the Public Market and the Memorial Market, as well as Wendy’s Mobile Market, that allow locally produced goods to easily enter the city; into professional kitchens and private individual kitchens alike. Homegrown Eats introduces tour-goers to producers, provides information on everything from urban agriculture to Prince Edward County, and has a partnership with AquaTerra Restaubistro, Local Food Local Chefs participants. As for the locations on the other tour, each restaurant has been chosen based on quality of product, history, and their current involvement in supporting community and local food. Kingston is so lucky to have access to food that hasn’t been flown half way across the continent so it is really important to make sure we do what we can to strengthen the local food circuit and make it accessible to as many as possible!

4. Many cities/regions earn reputations as the go-to destination for specific menu items. What do you think Kingston is best known for?

I think Kingston is known for its quality and diversity! Because there are so many places to eat that have access to great ingredients, restaurants really have to find a niche and do what they do well. Foodies in Kingston know good food so if a restaurant doesn’t deliver, something better will come along and take its place. Wow – I just made it sound really cutthroat! So, whether you are looking for a great curry, pizza, or sushi, you are going to find several restaurants that are working very hard to meet the high standards that the staple restaurants in Kingston hold up.

5. There seems to be an unwritten rule that if you can make it in Kingston, you can make it anywhere with respect to franchises, big and small. We’ve seen a recent influx of establishments setting up shop such as Five Guys, Spin, The Works, Menchies, Burrito Amigo, Jack Astor’s, and the list goes on. What new types of restaurants would you like to see added to the mix? What are Kingstonians craving that we currently don’t have access to?

I think that is probably pretty accurate. As I said before, Kingstonians know good food so if what the restaurants bring to the table doesn’t deliver, either in quality or experience, they will quickly disappear. I think chain restaurants are fun and, by their very nature, they are consistent, however, they occupy a different space in the food scene compared to locally owned and operated locations. In terms of what is missing, I myself am a huge fan of the Food Network show “Diners, Drive-Ins, and Dives” and I would love if something greasy and fantastic popped up that made some mysterious sauce they put on everything! I think that would be amazing because it would mean Guy Fieri would come to Kingston!

6. Currently tours run in the summer months only but we are a tourist town year-round. What are the chances of Kingston By Fork expanding into the winter months? What kind of locally acquired cuisine can we offer during the colder months?

Right now we are only offering summer tours but we are constantly keeping our eyes open for different ways to expand the company! Even though we wont be here this winter, there are so many great ways to eat locally in the winter! Going back to some old school techniques like canning and preserving can be intimidating but also really exciting and rewarding. There are a lot of ingredients to preserve in the winter that are local like apples, heavy greens like kale and chard, cabbage, turnip, squash and pumpkins, and potatoes. The cold and the dark means more time spent inside enjoying the heat in the kitchen!