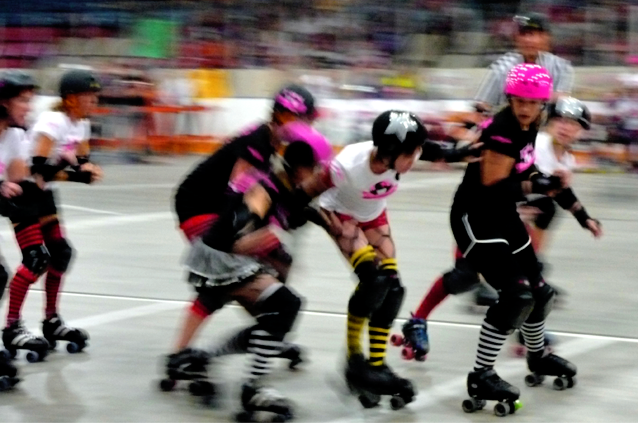 Tonight’s the night, as the Kingston Derby Girls make their long awaited return and kick off the 2011 season at the Memorial Centre.  From the crazy uniforms and fear-inducing nicknames, to the epic spills and electrifying half time show, our Derby Girls sure do know how to put on one hell of a show, fuelled by ice cold beer of course.  Tonight’s spectacle is double-header, as the SinderRollas will be kicking things off in a mini-bout at 6:30pm, followed by the KDG’s The Disloyalists versus Peterborough Roller Derby.  This time around, the halftime entertainment is offered in conjunction with the Skeleton Park Music Festival, with performances by Slick Whippet and Sheezer.  After the bout, head to the after party  at The Mansion featuring the usual suspects, The Gertrudes and Rueben deGroot.  The Gertudes have even crafted a song celebrating/warning of the Derby Girl, described as an “out of control eruption of a lover scorned by a fishnet-stockinged fearless femme on roller skates”.  Honestly, I can’t think of any better way to spend my Friday night than with the Derby Girls.  Be sure to check out our Flickr pool for our photos, and if you’re attending tonight’s bout, be sure to share your best shots via Kingstonist’s most awesome Flickr group.  TGIF!