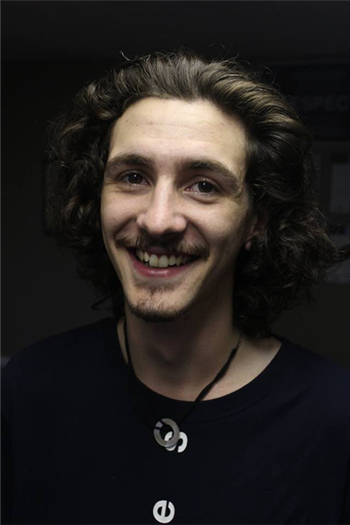 Jesse Losee is a 23-year-old artist from Kingston, Ontario. He is prone to sobbing without sufficient caffeination, and kicking out double-booked seminars from his rehearsal spaces by blaring techno and running around in circles screaming “WARM-UP TIME.” This is Jesse’s 9th show with Blue Canoe, and he is very excited for the opportunity to be directing such a spooktacular cast.

1. Tell us about yourself. How did you get involved in performing arts?

I’m an artist currently working out of my hometown of Kingston. I found my passion for theatre back in my grade 9 year, and I have been pursuing the life of an artist (re: Starbucks barista) ever since.

2. As the Director for Blue Canoe’s upcoming production of Tim Burton’s The Nightmare Before Christmas, your role takes you off stage and behind the scenes. How did you approach this, and what have you gotten out of the experience thus far?

I have been increasingly stepping behind the scenes of the theatre — most recently as co-lighting designer of Blue Canoe’s Peter And The Starcatcher. I’m challenging myself to become better acquainted with the production side of things, and moving into a director’s role seemed like a natural next step. I’m quickly discovering the incredible amount of time and energy used by the production team. Exciting, and exhausting.

3. The original film is a tried, tested and true fan favourite with plenty of memorable songs and endearing characters. How does the stage concert adaptation live up to the original?

With a concert adaptation, the primary focus is definitely the music. All of the songs and a lot of the original score will be performed by the cast, with heavily condensed (we’re talking 30 seconds – 1 minute) transition scenes just to help move the story along.

4. This production is a part of Blue Canoe’s “Songs & Spirits” series, which means that it’s performed in a cabaret-style setting. How does this environment change your approach to directing and executing the show?

First, we don’t have as much time as a “regular” show, so our rehearsals are quick-fire blocking and a lot of me shouting and waving my arms (directing?). I already believe in a collective atmosphere in rehearsals, so I’m relying on the actors to bring character and thought to the stage. They need to be having fun with their performances, and I feel that comes from bringing yourself to the script. We’re also focusing on comfortability with proximity to the audience, and keeping energy high to help engage that audience.

5. With iconic characters including Jack Skellington and Oogie Boogie set to perform, how important was it for you to ensure costumes, mannerisms and voices were accurate and/or original?

With letting the actors bring their own imagination to the characters, it definitely changes things up a bit. We also went in to initial designs with a fairly vague theme of “elegant but creepy” and let the design team run with that. They’ve brought absolutely spectacular things to the table, and I’m excited for all of their ideas to come together on the stage.

6. Kingston’s arts scene seems to have grown leaps and bounds over the past few years. As someone who is immersed in all that, what’s your take on the overall strength of the local live theatre and performing arts scene?

Kingston’s art scene has been in a state of constant growth for as long as I have been involved in it. I can only imagine that the community will continue to thrive and grow as long as the city continues to be a part of it. Young artists having the opportunity to express themselves in an environment of love and acceptance is a truly beautiful privilege.