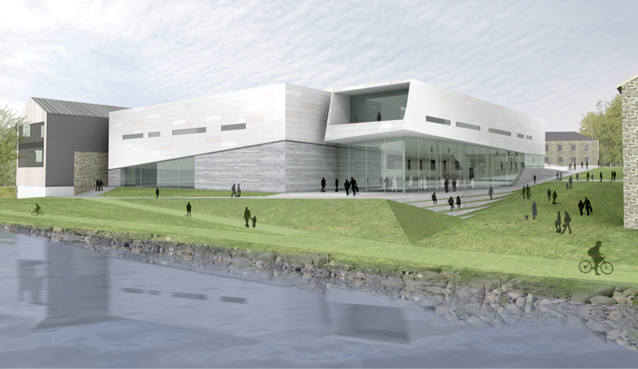 It’s not a secret that Queen’s University is under served by their performing arts venues, as Grant Hall, Theological Hall and Harrison LeCaine are simply lacking in too many key areas to be effective.  Since coming to Kingston, I’ve attended more student musicals and drama performances elsewhere in the city, than those that were hosted on campus.  Needless to say, when Queen’s announced that they would transform the J.K. Tett Centre into the shiny new Isabel Bader Centre for the Performing Arts, I was both ecstatic and uneasy.

The excitement is easy to explain, again because such a facility is long overdue for various departments and clubs.  Further, the potential for it to service and benefit people and arts organizations outside of the Queen’s bubble is promising.  As for my apprehension, well that’s more of a laundry list of unknowns.

First off, the Limestone City has a fantastic shoreline, yet time and again decisions are made to develop too close to it, thereby deterring sight lines, public access, and any sort of a waterfront pathway.  Essentially, I needed to see the fine details of the site plan before I could be confident that it would not impact public space.  Secondly the tenants of the Tett Centre who will be displaced.  Sure the new Queen’s performing arts centre will benefit the surrounding community, but I doubt the university is keen to give away free space to the previous tenants.  Last but not least is the preservation of the current, historic building.

The availability of numerous renderings of the building, as well as various publications regarding what’s in store for the centre have slightly resolved my concern, but not fully.  Last week, Queen’s provided a bit of positive insight as they announced that they would make small changes to the design to accommodate historic preservation.  They will present their compromise to city officials on Tuesday, August 24th.  In a press release, Ann Browne, Associate Vice-Principal (Facilities) states:

We look forward to continuing to work with the City in addressing elements that still need to be resolved, and moving this exciting project forward. It’s important that we strike a balance between preserving key heritage features and being fiscally responsible within our budget. The University has a proud tradition of celebrating our historical roots and the architects have created a stunning façade that respects the history of the buildings and of Kingston.

What do you think?  Will community, accessibility, history and heritage aspects get paid the respect their due?  Or, will the city look the other way as Queen’s latest crown jewel leaves a bad taste on the shore of Kingston’s waterfront?  Please be sure to drop off your comments below.

3 thoughts on “Isabel Bader Centre for the Performing Arts”