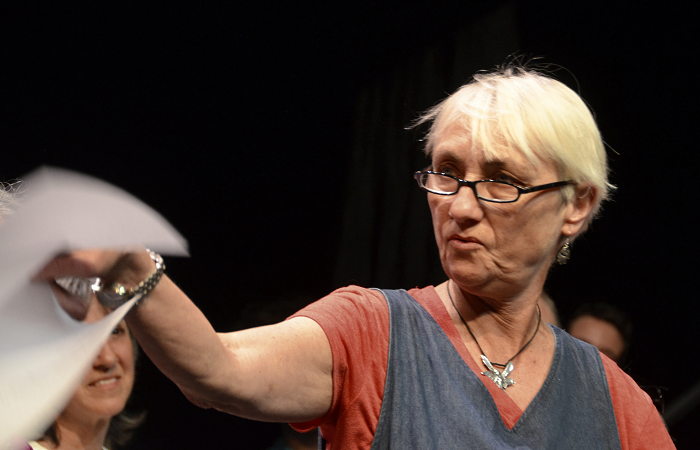 Kim Renders is a highly respected actor, director, writer and designer, as well as an award-winning teacher at the Universities of Guelph and Waterloo. She now resides in Kingston where she teaches at Queen’s in the Dan School of Drama & Music. She was the Artistic Director of Theatre Kingston for 4 years (20o7-2011) and continues to work with the Queen’s Drama TYA company, Barefoot Players, as both playwright and director (since 2007).  She worked for ten months with inmates housed in a federal correctional institution towards the creation and performance of an original theatrical presentation and is a founding member of Chipped Off Performance Collective, a local theatre company that creates and produces artistic presentations from a Queer and Feminist perspective.

Next week, Chipped Off will present Rhinoceros or What’s Different About Me? in the studio theatre at The Isabel Bader Centre for the Performing Arts. The show runs June 14th, 15th and 16th at 7:30pm and June 18th at 2pm. Admission is $15 or pay-what-you-can and tickets are available at the door only. However, we are giving away a pair of tickets for the Sunday matinee! Head to our Twitter and Facebook to find out more.

1. Tell us about yourself and your background with respect to the performing arts.


I’ve been a theatre artist for more than 35 years. I established myself as an artist in Toronto in the late 70’s, founding Nightwood Theatre and being among the first members of the collective that created the Theatre Centre.  I had the privilege of working in most of the mid-sized companies in Toronto at the time – Theatre Passe, Muraille, Factory Theatre, Can Stage, Tarragon, Buddies, Volcano, Young people’s Theatre, and, of course, Nightwood. I’ve also performed in theatres across Canada, from the Belfry in Victoria to LSPU Hall in St. John’s.

When I left Toronto in the mid-90’s and moved to small town Ontario, I started putting my energies into community-engaged theatre, (performances like Rhinoceros or What’s Different About Me?) – that combine the work of local professional artists with that of members of the community. I became hooked on the power of this kind of work.

2. Can you explain how Chipped Off Performance Collective works? Who are your performers and how does the collaboration come to be each year? Can you tell us about some of the participants in this year’s show?

I basically send out a message on Facebook – usually in January – asking for participants.  I name the topic (past years’ topics were: hair, waste and defiance) and people respond.  Word of mouth plays a big part in disseminating the message. Sometimes I actively approach groups. In previous years I have had participation from ISKA Youth, the Elizabeth Fry Centre, the Senior’s Centre and H’Art School.  The aim is to have as wide a cross-section of community participants as possible.  These performances are about creating a place for people to be heard artistically.  This year, the age range of our performers goes from 14 to mid-eighties.  Rhinoceros will include performers who have decades of performance experience, with those who are going on stage for the first time ever.

3. How did Chipped Off come to be? What inspired you to create a company with such a unique vision?

Chipped Off was formed in 2012, with the production of an original play written by company co-founder, Dan Vena, How To Bake a Pie: A Transgender Fairytale, with set design by co-founder Robin McDonald, and which I directed.  We all felt that there were many community voices that were not represented on Kingston stages, and we wanted to change that. As we cite in our mandate:

Chipped Off Performance Collective believes in the power of art and performance to surprise, enlighten, provoke, astonish, challenge and change. We are committed to presenting work that speaks to the needs and concerns of underrepresented or marginalized communities in Kingston. Embracing a feminist and queer perspective at all times, Chipped Off works to grow and diversify the range of local artistic, cultural, and theatrical production available to Kingston audiences.

4. Chipped Off is known for tackling broad but meaningful subjects, leading to thoughtful, sometimes serious, sometimes hilarious outcomes. How do you choose which topics to tackle? Have the interpretations by your participants surprised you at times?

This year, our topic was literally handed to us after the elections in the USA.  I received a message from Marie Lloyd – a local poet and activist  (and participant in this year’s show!) – who suggested Chipped Off produce Ionesco’s Rhinoceros as a protest response.  In previous years, the topics have come through discussion and active listening. And yes, I purposefully do not dictate how participants should respond to the topic presented.  For example, two years ago, when the topic was “waste” we had people creating poetry, video art, and monologues ranging from the loss of a parent, the decision to get rid of wedding clothes, to the Pacific garbage gyre, to one’s actual “waist” size.  It’s the variety of interpretation that makes these shows so much fun to be a part of – and to watch!

5. This year’s show is based on Romanian playwright, Eugene Ionesco’s 1959 play The Rhinoceros, which was written as a response to and criticism of the rise of fascism that preceded World War II. This is a heavy but incredibly timely topic. How has the realness of this topic affected the tone of this year’s show?

Believe it or not, we’ve managed to find some humour in the topic!  Ionesco’s play, in itself, is written in an absurdist style, which I personally find very funny.  And while there certainly are some somber contributions to the performance, our overall message – and the one we want the audience to leave with – is one of hope.

6. How does working with community members, some of whom having never set foot on a stage before, compare to your experiences in professional theatre? What stands out to you as a major difference or similarity between the two experiences?

I love both ways of working. I love actors. And certainly, what professionals can do, an inexperienced performer cannot – but the opposite is also true.  With Chipped Off’s performances, the sense of fear and joy and courage from the performers is palpable.  You can’t recreate that. It’s real and it’s there.  This is what draws me back to this kind of work. It’s life-changing.  That might sound overblown – but it’s true.  I’ve seen it happen. I’ve felt it.