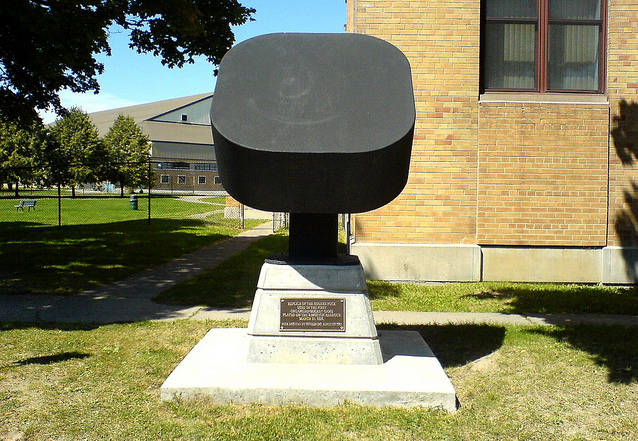 Around 1990, a younger, more hockey-crazed version of me, filed into the local hockey museum with my dad to stare at various photos, jerseys and other bits of historic memorabilia.  From what I recall it was a pleasant experience, but I haven’t considered returning since.  Since then I’ve made two pilgrimages to the HHOF in Toronto, where I’ve been up close and personal with the Stanley Cup, stepped foot inside a replica Montreal Canadiens dressing room, and even shot a puck past a virtual NHL goaltender.  Aside from the interactive experience the HHOF has to offer, their cozy relationship with the NHL puts them in prime position to receive every used puck, stick, sweater, and tooth the NHL has to offer as displays.  In spite of the IHHOF modesty, it has remains open, albeit on side street that’s far enough away from the eyes of most tourists.

A few months ago the group behind the development of the former S&R discount department store, now called the Smith Robinson building, publicly proposed moving the IHHOF into their new facility.  Not only would this place the IHHOF on a high traffic downtown corner, but it would also re-position the local hockey hall of fame within close proximity to the home of the Kingston Frontenacs.  While representatives from the IHHOF were receptive to the idea, they expressed frustration with the City who was portrayed as not doing enough to make the move happen.  While further negotiations have been kept out of the headlines, the Smith Robinson Building’s website recently reported that the IHHOF move has received a high profile endorsement:

Beloved hockey commentator Don Cherry has lent his support to a proposal to re-locate the Hockey Hall of Fame in Kingston to the historic Smith Robinson Building. The Kingston native toured the building on July 5, 2011, along with retired National Hockey League stars Wayne Cashman and Rick Smith. Hank Doornekamp and Nate Doornekamp of ABNA Investments guided the tour through the ongoing restoration project at the nearly 200-year-old building. It is being restored to its former grandeur. The video above captures Grapes during a stop on the third floor of the building, as the group talks about the possibility of renaming the hall. It’s hoped the facility, Canada’s oldest sports hall of fame, can be moved from its present home on York Street to the spacious stone building at 27 Princess Street, where it would occupy two floors on the northeast corner of the property.

While the next chapter of the IHHOF has yet to be written, do you believe that Grapes’ endorsement will help sway the decision to move the museum downtown?  More importantly, is the re-location a good a fit for downtown Kingston and the IHHOF?  Please drop off your comments below and let us know what you think.

Thanks to haven’t the slightest for today’s photo of the big square puck that sits outside the IHHOF’s current location.