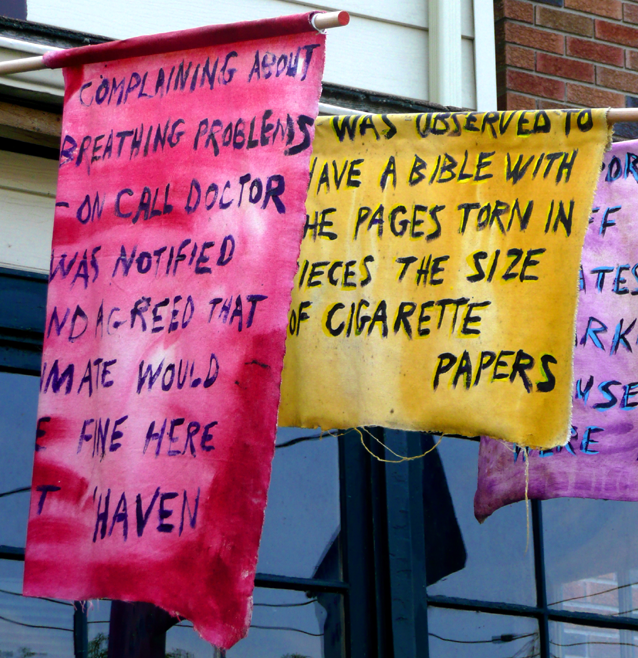 When non-Kingstonians are asked to describe our city, nine times out of ten, they’ll probably throw in words such as prison, inmate, or shiv.  With eight federal correctional facilities located in and around Kingston, our city is home to the largest concentration of prisons in all of Canada.  The long storied past of these big houses has been chronicled in part, and put on display for all to see at the Kingston Penitentiary Museum.  That said, the carefully curated displays only capture a small portion of what goes on behind the same walls that contained the likes of Boden, Bernardo and Homolka.

Having spent several years teaching in the prison system, local artist Dave Gordon reflects on life inside these distinct and complex communities. His public art display titled Inside, is comprised of a series of lively, multi-coloured banners with statements to suggest some of the realities of everyday life for inmates.  Juxtaposing the vibrant banners against the backdrop of the Swamp Ward Window Project; a public space in a residential home (448 Bagot Street), Dave’s encouraging  his audience to ponder the concept of home and community.

The banners read like observations made by a fly on the wall, recorded in some Prison Guard’s daily log book.  The statements elicit a wide range of emotions, as they span topics including sexuality, death, and contraband.  Two such examples are as follows:

Inmate seen participating in sexual activity during social – visitor was seen with hand inside his pants.

Inmate requesting to see psychology due to emotions he is feeling over his brother hanging himself in jail.

As someone who lives in the neighborhood, I pass by Inside on a daily basis, and welcome the latest Swamp Ward Window Project series with open arms.  However, at first I worried that some of the content might be inappropriate, or otherwise disagreeable to certain passers-by.  With time I noticed that curiosity was getting the better of many pedestrians, who had stopped to read the banners, and even take photos; check out our Flickr.  This proved that the series had the ability to break people out of their everyday trances, and perhaps stimulate conversation, or at least thought.  What do you think?  Be sure to catch a glimpse Inside, on display until September 5th.