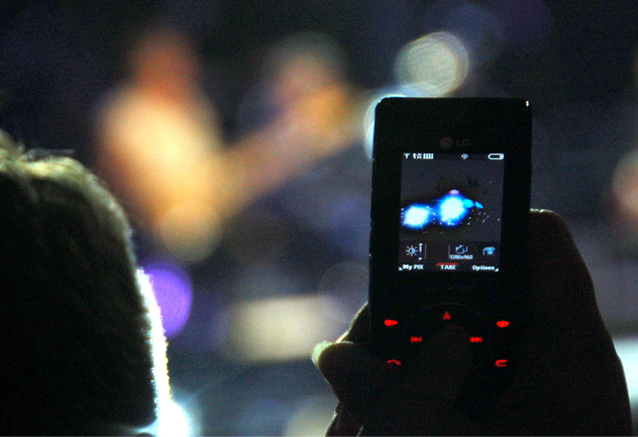 I think that our obsession with technology, with observing ourselves on cell phones, cameras and any other shiny new toys we have, has become more of a fetish than the actual experience. I’ve seen people actually film themselves watching a band and then ignore the rest of the show as they play back themselves watching the performance for their friends. There seems to be a very disturbing disconnect between the observation of an experience and the experience itself. Is it real if you watch it on your iPhone? Is an mpeg more real to you than the actual thing you recorded it on?

I’ve been lucky enough to find employment on cruise ships, and through that I’ve had the opportunity to observe other cultures and how they celebrate. It was an eye opener to be sure. When I was watching a band in an outdoor cafe in Istanbul I’ve never seen happier people. The whole crowd was clapping, cheering, singing along with and dancing to almost every song. I’ve never seen such elaborate dances done spontaneously in a bar, and I’ve certainly never seen men dancing hand in hand together. Not around baseball hat wearin’ Ktown anyway. Can you imagine the reaction to guys dancing and holding hands at Stages? I could go on, but then I’d just be bragging about my trip.

I don’t want to make it seem like just exotic ancient cultures from far away know how to party. In fact, the people I’ve seen who are the least shy about expressing themselves and participating in live shows are…Americans. Yes, Americans. It’s funny, because they are being inundated by just as many forms of passive media as we are, but after seeing the way our Yankee cousins hoot and holler and show no hesitation in expressing their pleasure (or displeasure), I realize that the shy apathy that I’ve seen around here may just in fact be a Canadian thing.

Obviously there is a down side to being participatory. There are the random drunks who storm the stage and grab the mic, thinking that everyone is just going to love their random off key screeching. There’s the bottle throwing at concerts, which is entirely uncalled for (except in the case of Nickelback), but there has to be a happy medium. Didn’t they prove at Woodstock that people can go out of their minds without destroying the foundations of society?

If you’re at a show, you’re not watching tv. You’re doing something better than tv, since you’re participating in a live exchange of music, feelings, art and life. Whether you know it or not, your reaction is part of the overall experience. The people in front of you are not pixilated images being flown to you from thousands of miles away, they’re real, and they are in your presence. They worked very hard on what they are showing you, and they have eyes to see and feelings to hurt. I’ve been laughed at and I’ve been booed, but there is not one experience on stage that sucks more than being ignored. So next time you’re at a show, you don’t have to patronize the performers by giving sympathy claps. You can react any old way you want that isn’t violent or obscene. Just react, and acknowledge that they are there. Be a part of the show. It makes all the difference.

Thanks to Scott Ableman for his photo, which captures a concert through the lens of a cell phone.