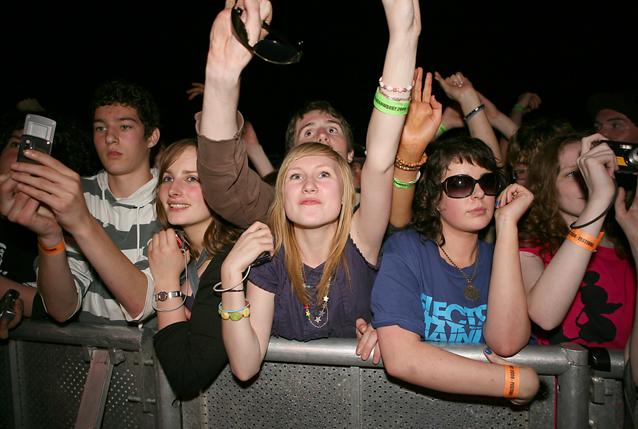 Over the years, I’ve been in just about every kind of show, band, play, art opening and any other type of performance you can think of.  Hence, I think that I have a sound understanding of what it means to be a good performer, as well as the characteristics of the best audience members.  On the flip side, I’ve also identified an interesting phenomenon, which I’ve dubbed the “inanimate spectator”.  What do I mean by this?  A couple of years ago, I was at the Wolfe Island Music Festival, and the first act was a young Queen’s band.  It was two in the afternoon, which is pretty early to be rocking, however nearly one hundred of their fans instantly materialized right in front of the stage. I was initially flabbergasted by this outstanding show of support. But, as the show went on, I noticed something odd: the audience wasn’t moving.

People were jammed right up to the front of the stage, similar to one of those bogus music award shows, but they weren’t dancing, raising the roof, or making any noise!  So basically the spectacle before me was something like a large group of inanimate mimes pretending to be a rock audience.

I’ve witnessed the same frustrating occurrence in local watering holes.  A band gives their all, and too often there is no reaction from the crowd.  A song ends, the guitarist screams out the final note, the drummer brings down the last cymbal crash and nobody claps, or reacts in any way. I’m not talking about crappy bands that don’t know how to engage an audience here; I’m referring to established, known Kingston bands.

I’m not trying to say this is how Kingston audiences are all the time, and I certainly don’t mean to single out the Queen’s students as prime offenders. I’ve attended amazing shows at places like the Grad Club where the audience is energetic, rocking hard, making noise and generally being a part of the show. Similarly, the Soul Shakedown‘s “no attitude, be yourself” mentality has restored my faith in Kingston’s party scene. The lack of self-consciousness that people exude at those events is really fantastic. When it comes down to it, participatory crowds make the people on stage play their best.

That said, it seems as though Kingston, and Canadian audiences in general, are being bombarded by too many forms of media, which is making us increasingly passive and apathetic. There’s no malicious intent behind it, but I’ve observed the reactions of crowd members and it seems eerily close to people watching television.  Are you aware of what you’re doing when you go to a show?

Tune in next week for part two, and in the mean time, quit being a spectator and particpate by placing your comments in the box below.  Thanks to Shane Kelly for the accompanying photo.