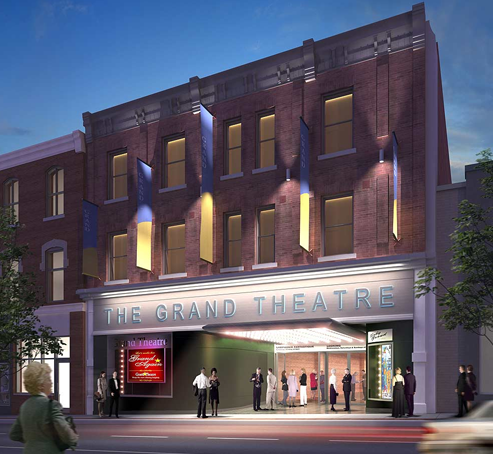 Back in my elementary school days, I boarded a bus for a field trip to watch a live performance at the Grand Theatre in downtown Kingston. Everything seemed bigger to me back then, so it’s no coincidence that I was taken aback by the magnificence and shear size of this historic building. To be honest I can’t even remember what show we took in that day, but the space left a lasting impression with my classmates and I. Many years later I returned to the theatre, and discovered that it’s grandeur and elegance had faded slightly. Soon thereafter, the theatre closed it’s doors in 2005 to undergo massive renovations in an effort to preserve the Grand, and provide critical upgrades. Three years later, after numerous delays and budget increases, she’s nearly ready to reopen and amaze another generation of starry-eyed youths.

The City of Kingston marked the Grand Theatre restoration project as 1 of 7 key community priorities, as the venue provides a wealth of cultural opportunities. In a city that was once without a K-Rock Centre, noted artists such as: Tommy Hunter, Chantal Kreviazuk, Rita McNeil, Michael Burgess, and Randy Bachman have graced the stage of the Grand. In addition, many local arts organizations including the Kingston Symphony Orchestra, and Queen’s Musical Theatre use the Grand to stage their productions. During the $17 million renovation, these organizations have been making due in less than ideal facilities, and are eager to breathe life back into the rejuvenated theatre.

Last week I stumbled upon a rendering of what the facade will look like when the scaffolding and construction equipment are finally removed. The restored building has an amazing curb appeal, which nicely blends  the historic roots of the Grand with modern elements such as bold signage, and elegant lighting. Further investigation uncovered another rendering of the lobby, which is certainly polished, but looks a bit too much like Stauffer Library if you ask me. Due to the fact that all the work has taken longer and cost more than planners originally expected, the opening lineup sponsored by Empire Life has obviously been scrapped.

Unlike the other new entertainment facility in Kingston, noteworthy performers actually want to perform in the intimate environment provided by the historic theatre. This begs the question, who would you pay to see at the Grand Theatre this summer? Be on the lookout for our sneak peek inside the Grand, which will be unveiled later on this week.

2 thoughts on “How Grand it is”