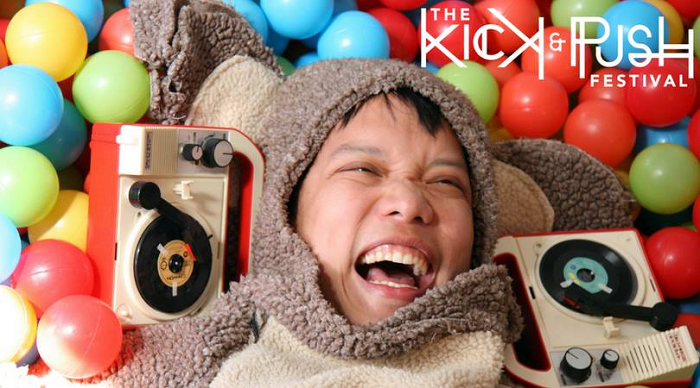 The Kick & Push Festival 2017 gets off to a roaring start tomorrow with Kid Koala’s Vinyl Vaudeville: The Silliest Show on Earth at the Grand Theatre. The three weeks following this exciting and unique opening to the festival will be filled with opportunities to take in theatre of all types, both in a traditional theatrical setting, and in unique (and mysterious!) spaces around downtown Kingston. This year’s line up covers a wide range of subjects with adult themed shows dealing with challenging topics, to live, interactive fun for the whole family. Participating companies for 2017 include Single Thread Theatre Company, Driftwood Theatre, Adam Lazarus, How We Are Collective, Outside the March, 6th Man Collective, James Smith, and Jesse Lavercombe. Check out our guide below to find out more about the exciting shows taking place in downtown ygk!

Kid Koala’s Vinyl Vaudeville: The Silliest Show on Earth: Kid Koala and his Incredible Dancing Machines bring a one-of-a-kind spectacle to the Grand Theatre! Be amazed by the brand new state-of-the-art robotic backup singer puppets, become mesmerized by the sultry fan dances of kid koala’s dancing girls, and see the almost life size articulated Nufonia Must Fall and Space Cadet robots dance to the beat! Hear kid koala classics as well as new tracks being performed live by kid koala on 2 x SP1200s and 3 x turntables! Watch the crew assemble a giant cardboard working gramophone on stage right before your very eyes! Enjoy the silliest show on earth and participate in parlour games… your chance to win prizes by playing 12 bit blues bingo, and with the funky roulette wheel of awesomeness. In town for one night only! A show not to be missed! Tickets are $14.90 and are available online and at the Grand Theatre box office.

How We Are, Part 1: The Morning After: How We Are, Part I: The Morning After is a play by Polly Phokeev about two young women, best friends, who wake up naked in bed together after a night out – and have to confront themselves and each other as they unpack the fine lines between romance and friendship among women, as well as the ethics of drunken consent. This show takes place at a mystery location in downtown Kingston. Tickets are $23.60 and are available online and at The Grand Theatre box office.

Love Me Forever Billy H. Tender: January 31st, 2021: Enter Billy H. Tender, Canadian teen pop idol. Billy is about to play new music for a raging audience in Toronto, but his family is elsewhere. His theatre theorist mother, Stella, has absconded from her research and is secretly soliciting phone sex with strangers. Hal, Billy’s adoring younger brother, hasn’t left his room… and no one is answering his calls. Following a sold-out premiere at Toronto’s Videofag, this one-man tragicomedy played New York City to rave reviews and will be right here on The Grand Theatre stage. Tickets are $23.60 and are available online and at The Grand Theatre box office.

Daughter: Daughter examines the beauty and horror of men raised in a patriarchal society having to come face-to-face with their new identity as patriarchs. Can they evolve? Can they repent? Can they change? This will be the scariest show you see all year, as dangerously engaging (and genuinely funny) as it is brutally visceral. This show takes place at The Grand Theatre. Tickets are $23.60 and are available online and at The Grand Theatre box office.

Othello: Driftwood Theatre presents Othello – William Shakespeare’s blistering tale of race, jealousy and revenge is set against the backdrop of Canadian history, when in 1974 Canadian soldiers are caught in a life or death struggle on the small island of Cyprus. In 2017, Driftwood Theatre embraces the unique quality of over 20 Ontario communities. With a site-specific aesthetic incorporating public space, no two performances of Othello will be quite the same. All performances are accompanied by a special audio installation, The Cyprus Project. This is a free performance taking place in Market Square.

Lessons In Temperament: In Lessons in Temperament, James Smith tunes pianos in various public and private spaces throughout Kingston while exploring the concept of equal temperament as well as his three older brothers’ mental illnesses: obsessive compulsive disorder, autism, and schizophrenia. Smith attempts to grant balance to the instrument that has both kept him grounded and kept him company throughout his life. Part memoir, part performance art, part tune-up, this site-specific show offers a unique theatrical experience, and a singular glimpse into the lives of those living with strange, beautiful, distempered minds. This show will take place at two mystery locations in downtown Kingston. Tickets are $23.60 and are available online and at The Grand Theatre box office.