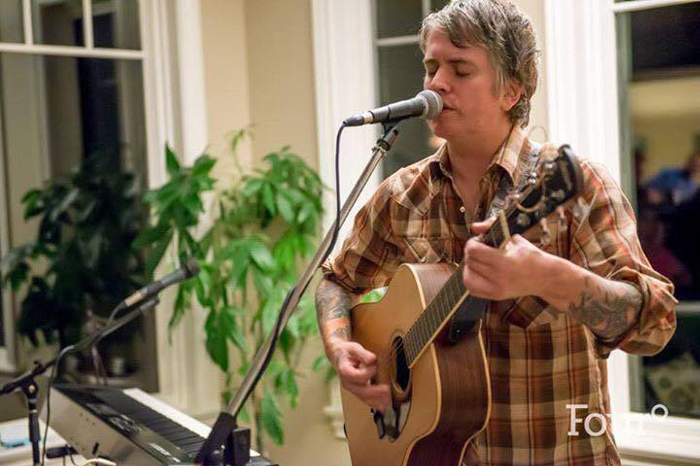 Chances are, you know the name Greg Ball. Probably, you’ve caught an amazing set by him at a venue around town. Possibly, you’ve had to throw him a text one Sunday morning to find out if you even paid your Red House tab the night before. Almost certainly, someone you know has recently shared a link online to vote for him in CBC’s 2016 Searchlight competition. In the off chance you don’t know Greg personally, you can rest assured you are friends with a friend of the affable chap currently in the running to become a regional semi-finalist in the annual talent search. Here, he chats with us about his songwriting process, great tours he’s been a part of, and how it all started so many years ago at summer camp.

1. Are you from Kingston originally? If not, what brought you here and keeps you here?

I am originally from St. Mary’s Ontario, and via Stratford and Vancouver, I ended up moving to Kingston to play in a band called The Harpies (close to the herpes, only not as contagious). After the move we played a couple shows and that was it, the band broke up. I then stayed in Kingston because I loved its pretty little downtown that sort of reminded me of my hometown, and I had made some great friends. Then, the real reason I am still here: I fell for a gal and made other people who we are still raising today.

2. Can you describe how you got started playing music?

I first picked up a guitar at summer camp. I had a crush on a fellow camper. She was starting to come around to me. Maybe I wasn’t her type, but she was considering maybe holding my hand. I could feel it. Then a councillor pulled out a guitar and played “Running to Stand Still” by U2 and she was gone, I had no chance. I knew then what I needed to do.

3. Any challenges along the way as you began to define yourself as an artist? Particular moments or shows that felt triumphant?

Lots of challenges long the way! First time playing in front of people was weird, I recall, and the first song attempts are pretty funny to read back on as well, but it’s all a big part of who you become as a performer or artist. As far as shows go, Paul Langlois’s Not Guilty tour that we (the band and myself) were on is probably the best time ever as far of a string of shows goes. Any show is a riot though, especially when you are friends with your bandmates.

4. Describe the songwriting process for you. Is it more collaborative, or do you do your writing solo?

My process starts in the front room of the house. Could be something I thought of, like something in my past, or a rough little idea. I grab my acoustic and start working out a melody, basic structure and some changes. Then the process moves to the jam space where the band writes their own parts to the song. Sometimes all the words are there, but also sometimes not. I try to draw off anything, which is how “Addicted” came about. (That could be a pun.)

5. What has your experience been like with Searchlight in past years and currently?

This is my second time as a Searchlight entrant. To be honest, I find it weird that it’s an online voting contest. I guess it’s how they thin out the herd before the judges this year. The good thing about it is that it draws attention to our area and you get played on the radio. Not just in a local talent indie way either, or having to pay into a company $500 per song just so a music director somewhere won’t put you into rotation anyways. You get spun on CBC, which is worth it.

6. You play publicly both in various groups, as well as solo. Are you more drawn to one over the other? Any favourite gigs past, or that you look forward to upcoming?

I love to play, but I need money to do so if it’s a weekend gig, because I make my cash behind the bar or serving. Last couple of times I have played it’s been solo. Stone Water Pub in Gan is one of my faves. I also have a featured artist spot at Red House West the first Sunday of every month. It runs from 2 to 5pm with a different featured guest each time. We have a few gigs this summer: River Rock Festival down in Perth County, and Pan Chancho Backyard BBQ will be fun as well. There’s another I can’t say anything about yet (insert smiley face here!) Looking forward to all of them.

Public voting for regional semi-finalists in the CBC Searchlight competition closes April 20. We implore you to head here before that to vote for Kingston’s native son Greg Ball.