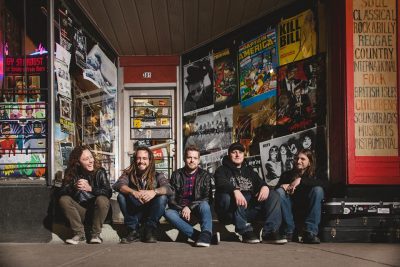 Tonight at The Toucan, Goldwing will take the stage for their one year anniversary as the Monday night house band.  So far, frontman Ryan Gollogly is pleased with how the band is progressing.

“We are the tightest we’ve ever been as a live unit, and as friends,” he says. “It has forced us to find our weaknesses and make them strengths.”

Keeping a weekly show fresh, for both the audience and the band, isn’t easy, but Gollogly’s proficiency as a writer makes it a bit easier.

“We try to add new songs to the set each week,” says Gollogly. “I’m always writing. I’m inspired by nostalgia, family, friends, Kingston nightlife, seeing what makes everyone tick. I try to write music that hits home. We have enough songs to change up the setlist each night. It’s always a party, but not often the same party.”

The Monday residency at The Toucan has hosted, and helped develop, some of Kingston’s best-known bar bands. Local blues favourites Blue Monday originated the night after moving from playing Mondays at The Wellington for several years. A couple of years later, Ghetto Xpress rose out of Blue Monday’s ashes, holding the night until late 2014, when Rueben DeGroot’s Rocket Surgery took over. DeGroot left for BC a year ago, and the hallowed reins were handed over to Goldwing.

“It was an honour and a heartbreak,” says Gollogly. “I fucking love Rocket Surgery. They asked [us] to fill the spot because we had enough original material to cover the night two times over. But we had some friends talk them into choosing us.”

The band, which is (usually) rounded out by bassist Alec Barkin, drummer/percussionist Daniel “Dinky” Chalmers, guitarist Matt Kirby, and banjo player Nick “Pickins” Patterson, has also been working on a new album for some time, but Gollogly insists they are nearing completion.

“The new record is finally almost done,” he says. “I’ve been saying that for two years now. I get asked about it weekly, but we are finally on the homestretch.”

Apart from their Monday night Toucan shows, the band is looking to do a small tour later in the year, release a video – starring Gollogly’s dog – by local director Justin Holland, and will play sets this summer at Joel Stone Park in Gananoque on Friday, Jul. 27, 1000 Islands Poker Run on Friday, Aug. 17, and Back to the Farm: MacKinnon Brothers Beer & Music Festival on Sunday, Aug. 19.

Check out Goldwing tonight at The Toucan. John Ainsworth opens the show at 10 pm, followed by three sets of Goldwing. Tony Silvestri will be sitting in on keys, plus several other “sweet guests.”