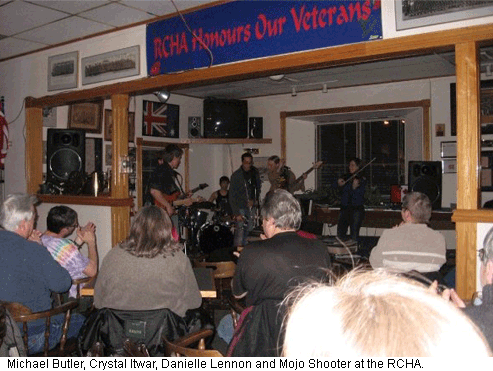 The Kingston Blues Society formed in 2006 and has made quite a dent in our local music scene in that short time. Every month musicians and music appreciators get together for a public jam. In between jams the society hosts great shows featuring both local and international blues artists as well as social events for blues enthusiasts such as CD swaps and BBQ’s.

I’ve been out to the last two Blues Jams at the RCHA on Ontario Street and the event is quickly becoming one of my favourite nights of the month. The Society meets the second Saturday of every month from about 9pm till midnight. Most people come to listen and dance but if you bring an instrument you can get your name on the list and you will get called up to play with the fantastic house band, Mojo Shooter.

The band is a super talented group of local young guys who are dedicated to the blues. In addition to jammers, Mojo Shooter is joined by a featured guest each month. February’s featured musician was Michael Butler, an uber-talented sax, flute, drum and bass player…not to mention a singer, rapper, beat-boxer and quick-witted entertainer. January’s jam featured Emily Fennell, local rockstress who can be seen playing and singing all over town (my favourite place to catch her is at The Merchant for Fennell Fridays).

This month’s jam will be this coming Saturday, March 15th and will feature Jack Troughton from Kingston’s own The Ones. Things get going around 9pm and the cost is $3 at the door. And yes, the bar is open.