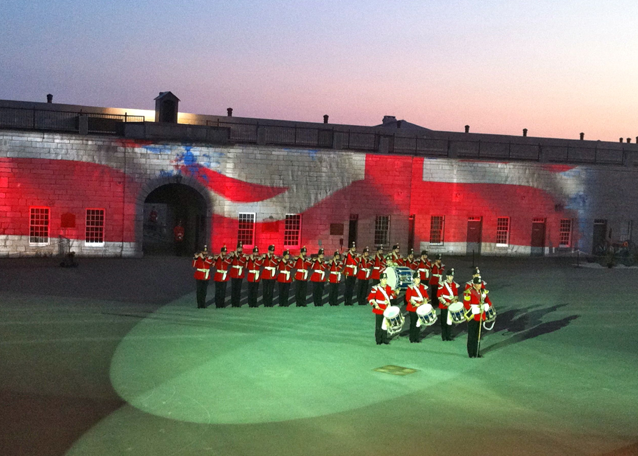 For some locals, Fort Henry is seen as not much more than a tourist destination, or a once-a-year tradition during Fort Fright. This season, though, Fort Henry has been going through a sort of rebranding campaign to elevate it from tourist trap to vibrant choice for locals. As a general girl-about-town and longtime local who barely gives the Fort a second thought, I suppose I am squarely in the target market for the Fort’s latest efforts. I was able to take in a Fort evening last week and I am pleased to say that I am thoroughly won over.

One of the biggest draws is the new Battery Bistro, a contemporary restaurant with a large patio overlooking the water by the fort’s upper south wall. Some foodies may scoff that the Fort’s restaurant is gimmicky – wait staff in colonial garb and such. But there’s nothing silly about the Bistro. The staff are good-natured and jovial. (For the most part, they are also all extremely beautiful men! Points). The restaurant has a very cool, laid back vibe. On ceremony nights, the Bistro offers a fixed menu of barbecue and salads. It’s good stuff, but the ambiance is really where the Bistro excels. The live music and lake view – plus beer, of course – make it a pretty ideal patio.

The ceremony begins at sunset in the lower fort. First up is an amusing bout of audience participation: trying to get children to march in line. Lots of laughs from the crowd as a few rights and lefts get mixed up. Following that introduction, the sunset ceremony takes off with a fife and drum routine by the Fort Henry Guard. The FHG, for the uninitiated, is made up of college and university students, many of whom are new each season. Their precision with both the music and the marching routine was incredible. Complementing the Guard is a multi-million dollar projection system on the south wall, which shows a series of historical images and quotations. The projection system is well worth seeing. The images and music make the whole show seem that much grander. The Guard then does multiple precision rifle drills, which you really have to see to appreciate. In fact, the Fort Henry Guard is among the top 5% of the world’s precision drill performance teams. The climax of the whole show, though, is the battle reenactments. If you thought (like I did) that the cannons around the top walls haven’t been used in a hundred-plus years, you’d be wrong. The FHG fires authentic colonial weaponry and the cannons during the battles. It’s very cool.

For those that haven’t checked out the new ceremony, I don’t want to spoil the ending. It gave me goose bumps. I walked out of the Fort feeling really proud to be Canadian and really joyful that I live in such a wonderful city that can showcase our history. I’m sure there’s plenty to say about the Britain’s colonial ravages and a few hundred years of subjugation. But amidst the empire’s tyrannical expansion, this lovely country was born. And it feels pretty great to sit at the Fort, look out at the water, and make a toast to that.

For more information about Fort Henry’s events and for ticket information, visit www.forthenry.com.