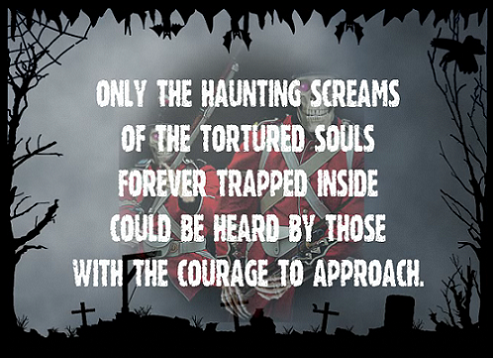 On a stormy day in 1846, twenty three men were working on Cathcart Tower, which is part of the Kingston Fortifications Network and located directly across from Fort Henry on Cedar Island. They noticed that a storm was coming in quickly and decided that they would row ashore in a boat made for twelve people. Seventeen of the men drowned on that day. Ever since, employees at the Fort, and locals have noticed strange occurrences along the waterfront, ranging from ghostly noises, to mysterious glowing lights, and shadowy figures floating along the water. Such stories are legendary around the Fort, and they now form the basis for the new Fort Fright experience.

From October 10th until November 15th, Fort Henry will become Fort Fright every Tuesday, Wednesday, Thursday, Friday and Saturday evening from 6:00 pm to 10:00 pm. Guests are invited to learn more about the above mentioned Ghosts of Deadman’s Bay, as well as a slew of other resident ghouls including: Nils Von Schultz, Mr. Robert James and Elizabeth, Gunners Marsh and Smith, as well as John Montgomery’s fifteen. With tours set in the dim light of the Fort, and the Dead House, the goal is to entertain, and scare both young and old.

In addition to the general festivities planned for Fort Fright, they’re also planning some pretty fun events for All Hallows Eve. From 6 to 7:30pm the Roger James Group will play tunes for costumed kids at the Little Ghouls Ball. Later on in the evening, the Trevor James Group takes the stage from 8 ’til 11pm as a part of the K-Rock Kostume Ball. Although I doubt I’ll be spending Halloween at Fort Henry Fright, I’ll certainly be making my way to see the spooky Fort in the next few weeks. Will let you know if it’s worth your while, but if you beat me to it, please drop us a comment.