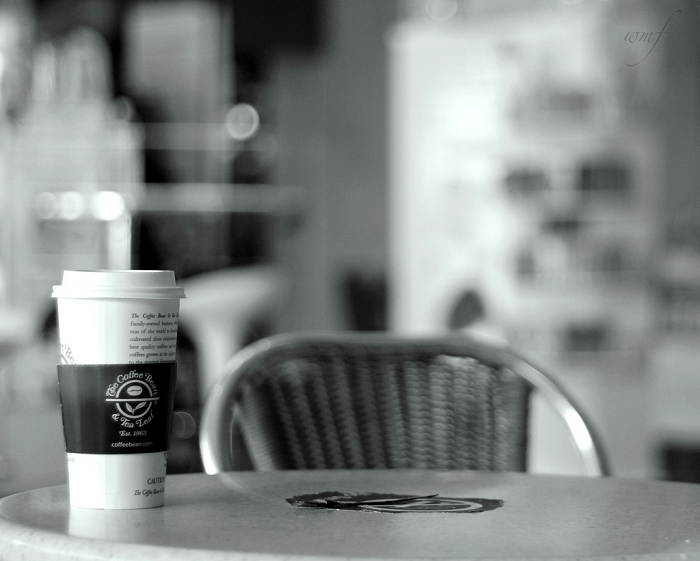 I walked into a certain Princess Street café one day last spring and ordered a cup of coffee and a pastry, stating that I wished to enjoy my purchase on the premises. A minute later I was handed a disposable cup filled with an invisible hot liquid and a paper bag containing, presumably, a butter tart. The young woman working at the counter smiled broadly, but I’d be lying if I said the smile I flashed back was anything more than good manners. Did she think the row of ceramic cups and plates behind her was merely decorative?

But then I thought, wait—perhaps this is what it’s come to: people are simply unaware that sitting down to enjoy food outside one’s home is one of life’s greatest pleasures. The whole point of going out is precisely that. Restaurants, cafés, bars, and bistros are not meant to be relay points between cook and consumer, with staff poised to make the hand-off so you can get that lovingly prepared meal home ASAP for prompt desecration in that obscene contraption known as a microwave, or devour it thoughtlessly like so much fuel on the race to your next appointment. Better to fast than eat fast food.

Did I mention that this was going to be a rant?

Shortly after the café incident, on an evening when I was planning on a film at the Screening Room (speaking of things it’s a joy to do outside the home), I decided, for research purposes, that I’d have a pre-movie dinner at the Taj Curry House, which appeared to do a lot of take-out business. I’d have preferred somewhere with more atmosphere, but then I reckoned that form follows function; if I don’t do my part in stimulating eat-in culture, who will?

So I took a seat facing the street, the better to view the people going by—people-watching being one of the many delights associated with eating out. I was soon brought a solitary papadum, which looked rather sad and lonely in its basket, although not as sad as it would have looked wrapped in a piece of tin foil and stuffed into a plastic bag. I nibbled at it and imagined the conversation I might have had, had I not been, like the papadum, alone.

This gave way to eavesdropping, but as the only other guests were speaking what I took to be Mandarin, that didn’t get me very far. My meal came quickly though, quicker than I’d have wanted had I been in company, and this too I put down to the kitchen’s orientation toward the take-out crowd.

I ordered the bhoona curry with beef (one of the “classic” curries) without knowing exactly what I was going to get. This is an ongoing struggle with me. I think to ever properly understand even the broad strokes of Indian cuisine I will have to go and live in India for at least a few months. Until I can do that, however, eating in an Indian restaurant, where the owners have made some little effort at creating a vaguely authentic ambience (if not through music or décor, then at least through aroma), will get me far closer than cracking open a Styrofoam box on a vinyl couch in front of a television ever will.

It was sad to be the only seated customer once my neighbors had left. This place is, after all, called a curry house, not a curry counter.

It was the first dazzlingly beautiful day of spring, the first when a reasonable person is able to spend the entire day outside in short sleeves. I had gone for a six-hour bike ride through the woods, towns, and fields north of Kingston, and all the way back I dreamt of lodging myself on some patio or terrace downtown to watch and feel the buzz of people, take in the late afternoon sun, and rest my muscles after a bout of exertion.

I spotted Olivea from across Market Square, as I strolled from my Sydenham Ward apartment, and knew it was meant to be. Now, cocktails are not the sort of thing you order to take out anyway, so maybe this shouldn’t be part of my apology for eating in. But they are a quintessentially participatory kind of dining. (I’ve drunk cocktails alone, mind you, and enjoyed it, but I’m not proud of it, and it’s certainly not something I would encourage my children to do—if I had any.)

In this age of leather-aproned mixologists, cocktail and aperitif concoction have been elevated to an art form, with each bar producing something distinctive, even if many of the base ingredients are common commercial products. So a cocktail, unlike a mass-market beer or pop, really does involve something artisanal. Also, for better or worse, alcohol loosens the tongue, encouraging conviviality.

If you’ve got an anti-social take-out habit, perhaps this is the place where you’ll be able to start realizing what you’re missing out on.

Only an insane person would order take out from Le Chien Noir. This is Kingston cookery at its pinnacle, and I would not consider it out of hand if the chef, in answer to such a request, acted as I have heard of certain precious French chefs acting and dragged the offending guest out into the street by the ear, scolding him thoroughly as he did so.

Just last week, thinking it was time I got back to this little diatribe and wrapped it up on a positive note, I checked my bank account for sufficient funds and then sallied forth to the beloved Brock Street eatery. “Now this is dining,” I said to myself, taking in my chic surroundings and listening to the pleasing sounds of glasses tingling, wine corks popping, cutlery striking ceramic on its way through succulent morsels, and, perhaps most importantly, of people enjoying one another’s company over delicious food.

I took my time with an appetizer of oysters and freshly ground horseradish. Then I spent a pleasant hour with a duck confit, served with rocket over a bed of navy beans, and washed down with a glass of heady Zinfandel. Although even at this fine restaurant the server seemed a little nervous at my request to wait a moment before thinking of dessert, she left me alone to decide on my own time.

As it turned out, dessert was the least inspired part of the evening, and I might have held out for one of the ice cream spots down on Ontario Street. It would have given my conclusion a nice ironic twist, as ice cream is one of the few foods it is more than acceptable to enjoy on the go.

Perhaps there are those evenings when take-out really is the perfect fit. The problem starts when it becomes our normal way of patronizing restaurants. Any anthropologist will tell you that eating is a fundamentally social activity—a ritual sharing of the spoils from hunting and gathering. Fast food leads to the breakdown of society.

I also can’t help but wonder why it is that, except for pizza and the big drive-thru chains, take-out is usually associated with non-European food. Are we not slighting such fare by extracting it from the context of its production? I don’t want to be too rhetorical, but I think the question is worth considering.

Packing up a meal like luggage in plastic, paper, and aluminum for the short trip home is hugely wasteful. What’s more, it usually requires reheating and a loss of flavour, texture, and magic. Take-out food will never have the same verve as food whisked from kitchen to table on a real plate. The smells, sounds, and sights of cooking that precede that moment involve guests in the process and make the meal that much more enjoyable in the end. Finally, let’s not forget that eating out helps keep our downtown lively.

So next time you don’t feel like cooking, tear that cheaply seductive paper menu from the front of your fridge and send it straight to the trash can, put on some presentable clothes, and make your way down to your favourite restaurant. Savour the food where it was meant to be savoured and, with all due respect, leave doggy bags to the dogs.