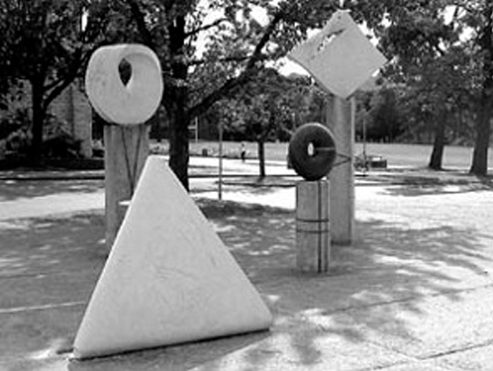 The work is a group of sculptures made from a combination of materials: terrazzo, portland cement, marble chips and epoxy and created by Alan Dickson, professor of Fine Arts at Queen’s. Dickson emigrated to Canada in 1970 from England to teach at the university and the work was commissioned soon after by the Department of Mathematics and Statistics in 1971 as part of an initiative to enhance Jeffrey Hall and its surroundings.

The forms are an investigation of the concept of infinity as represented by the mobius strip – a physical structure that is both three-dimensional and one-sided. In other words, you can run your hand along the entire surface without ever crossing an edge. This can be clearly seen in the above photo with the two large white pieces on pedestals. Go take a closer look!

One thought on “Five Sculptures on Topological Themes”