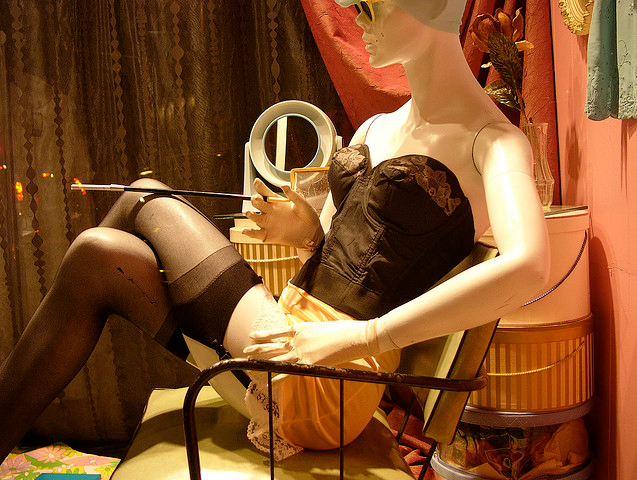 Despite the last recession and the influx of chain clothing stores that have recently emerged in Kingston, local clothing store owners say that the key to their success is being on top of the latest trends.

Owner of local boutiques Agent 99, Blueprint and Three, Cyndy Gibson said some of the summer trends her stores will offer; rompers, hippie chic and denim shorts.

‘I think the downtown Kingston look is a step up as they look to our boutiques to lead,’ she said, adding that for that reason local boutiques in the downtown core must be on top of the latest trends to attract customers. In the summertime Kingston is known as a getaway destination for many, so the items available for sale must be appealing to the trend-savy customer.

When it comes to describing the city’s downtown sense of style, Gibson said that she would call is ‘upscale casual’ due to the higher concentration of youth culture and retirees.

In comparison to bigger cities nearby like Toronto where the fashion is more uptight and Montreal where it’s more trend-based, she describes Kingstonian fashion as more laidback.

This key distinction in preference of attire is what allows local boutiques owners such as herself to cater to customer demands.

‘It’s not just about catering for a certain demographic based on age, but rather a lifestyle. You have to have a connection to the people and know what they want,’ she said, adding that boutiques offer customers unique pieces, while chain clothing stores often produce mass-made products internationally without taking local fashion climates into account. Although oftentimes a lot of the chain stores do offer cheaper price items, Gibson said that for the customer interested in fashion, they often opt for buying a unique and slightly pricier item within reason.

‘I think one advantage that we have is that our stores are impacted by how the town moves, the students. For example, for Feb fest we had items that catered to that,’ she said.

With the arrival of H&M to Kingston, Gibson said she is not worried that this will effect her stores.

‘I think with big chain stores, what happens is that when they first come people go crazy for it, but then it changes and it kind of settles down.’

However just because chain stores are often more well recognized because of their brand doesn’t necessarily mean that local store owners want them gone.

‘It’s good to have them here because they kind of show to others that Kingston is a market for fashion,’ Gibson said.

Elizabeth Lambe, a recent graduate from Queen’s University who has spent her share in local boutiques in Kingston said that the downtown location of stores like Novellino and Agent 99 are very convenient.

When it comes to choosing between chain stores and independent boutiques, she said she shops at both, however in boutiques she usually opts for unique and vintage pieces.

‘I feel like a lot of things at Urban are sometimes overpriced and the quality doesn’t match,’ she said, adding that she often finds boutiques to be well priced.

‘Over the years, I’ve gotten the chance to know the owner of Novellino. She gets in some awesome vintage items, she gets vintage Hermes, Coach and also gets to shop the closet of Sex and the City, so that’s pretty cool.’

Tammy Godefroy, owner of Novellino said that overall Kingston is more price-conscious city compared to Toronto and Montreal where trendy items of higher price would be more likely to sell.

‘It has to be. Kingston doesn’t have the economy or the style to justify bringing in all the same looks. We still bring in some styles that would 100% sell out if we were in larger cities so that our customers have a choice, but it’s definitely a different market here,’ she said.

However being an independent store does have its challenges when competing with chain stores who have larger stocks.

‘I would say it’s more difficult because you don’t have a head office, you are the head office. You are completely responsible for everything from the stock selling to hiring and training to payroll. If you were working for a chain you would only have 1 job,’ she said, adding that with chain stores the name is often more recognizable with customers.

Godfrey said her store also looks to utilize their website as a way for capitalizing on convenience for shoppers.

When it comes to competing with chain stores over items, she said that her philosophy is to not compete with similar products and prices.

‘Offer something that they don’t, that way it’s not competition, it’s choice.’

Thanks to erlin1 for today’s photo.