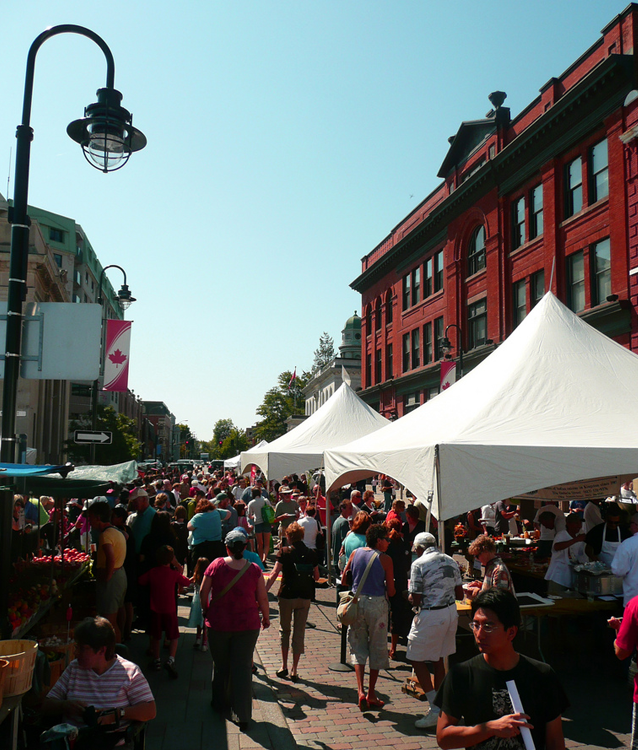 The whirlwind long weekend is over, the Frosh have officially touched down, and Fall is fast approaching.  In case you missed it, Kingston’s ever-expanding Fare on the Square took place this past Saturday on the back-doorstep of City Hall.  The wonderful gastronomical affair attracted huge crowds, while attendees enjoyed a mix of local produce, restaurant fare, live music, and demonstrations including yoga, and cooking.  Although Springer Market Square is regularly inhabited by regional farmers selling fresh produce, meat, cheese and baked goods, there were easily twice as many vendors on hand for Fare on the Square.  This meant that the selection was bigger and better, as it included beefsteak tomatoes, grapes, peaches, squash, and much, much more!  In addition, local restaurants such as Currie Original, Le Chien Noir and The Kitschen offered up sample, gourmet dishes, which could be enjoyed for next to nothing.  The fresh produce and resto-cuisine was a great compliment to the corn roast, as well as the popular, free tomato tasting.  Aside from the sound of the munching crowd, the Square came to life with live musical performances by the likes of the Emily Fennell Band and Boru’s Harp.  Although I missed both of the demonstrations put on by celebrity Chef, Jamie Kennedy, I overheard many complimentary reviews from inspired, budding cuisiniers.  For a small taste of what you missed, check out Kingstonist’s newest Flickr set.

2 thoughts on “Fare on the Square”