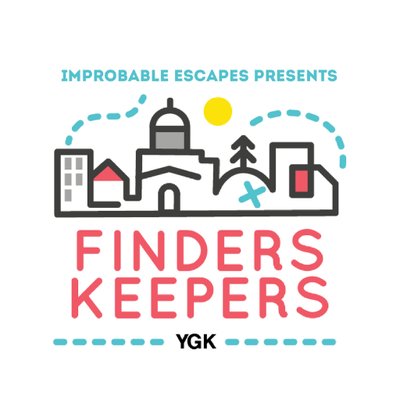 Treasure is waiting to be found in Kingston. I’m not talking about historic sites or fine restaurants, those are nice too, but starting Thursday, Dec. 6, 2018, hidden treasure will be placed in certain spots by the wondrous people of Improbable Escapes, for anyone to find. All you need to do is follow along on social media, read the clues that they release on the specified hunt days and join the hunt that is YGK Finders Keepers.

How do I know this? Because I participated last year, and it was awesome! The little child inside of me who yearned to be Indiana Jones was running around downtown Kingston last year at this time hoping to find a treasure.

In the weeks leading up to last years Finders Keepers hunt, my wife, Laura, and I started talking about this Twitter account that was promising a treasure hunt in Kingston. We thought it was strange and probably a hoax, but after reading a follow up tweet from Make It Home YGK about how he met with the organizers and assured everyone that this was legit, we started to get excited for the coming hunt.

On the hunt day I participated in, it was cold and dark unbelievably early, and as the hours ticked down to the first clue, I was prepared to venture out into the frozen tundra that outside felt like and hopefully find a worthwhile treasure. Laura agreed to stay home and be a base of operations – she was great of details and clue reading, and I suspect she wanted to stay warm (Someone needed to stay home and look after our kids).

Off I went into the night down Johnson Street with a thought that the first hunt had to be in the downtown. We knew nothing about the people behind Finders Keepers, so we assumed it had to be in a place that was easily controlled, and public, but also in the heart of the city. The first clue released at 7 p.m. was a musical hint, but did nothing for us. As I walked around St. George Cathedral waiting for the next clue to drop and talking to Laura on my cell phone, I wondered if this was silly. What in gods name was I doing out here? I stopped thinking such ridiculous thoughts when the next clue was released.

It was a fill in the blanks mystery that led me to Confederation Basin, and something to do with the ribs of a boat. I ran into the park, huffing and puffing (I really should exercise more) where there were numerous treasure hunters scanning the dark night hoping to find the little jewel amongst the common items of the land.

I walked throughout the park, checking all statues and cracks or crevices for a hidden treasure. I stopped at the “The Spirit of Sir John A” and scanned the steam giant for any hiding spots. I wondered to myself quietly, so I wouldn’t help any competitor, where the little prize could be hidden. While I circled the locomotive, in the back of my mind I was thinking of the clue, ribs of a boat and where on Earth could that be in Confederation Basin. I hoped I didn’t need to go for a swim in Lake Ontario.

After my second lap of the locomotive, I started to walk away to search elsewhere, when I heard what no treasure hunter in this contest wanted to hear: “Finders Keepers!!” The prize had been found, and just after I had walked away from it.

In the steel ribs of the front of the train was the hidden item. I walked by to see the victors with the treasure in their hands. It was true, the game was over, and I lost. I think I wished them congratulations from a distance, and then I made the call home to Laura. It was time to go home.

I never did get out to another Finders Keepers hunt last year, but I followed along on social media and watched each week as the clues dropped, and the eventual winner was announced. Some hunts were quick with few clues; some took a little longer.

The drive for success and the idea of finding treasure in plain sight is something that will always attract me. I love the competition level of shows like The Amazing Race, but I’m certain I would never have the time to compete at that level. You have lots of opportunities to participate and the prizes are phenomenal. Try it out, and maybe you might find a valuable treasure. Did I mention it’s free to participate?

The 2018 hunt days are December 6, 12, 17, 19, and 23. The theme of the December 6th hunt prize is ‘Staycation.’Happy hunting and bundle up if you go. If you prefer to stay warm and live vicariously through others, follow the hunts on twitter.com/YGKfinderkeeper.

Bill Gowsell was born and raised in Kingston. With an interest in history, food, wine, and all things Disney, Bill has been writing for the last eight years on a variety of topics. During the summers he can be found at the family cottage north of Kingston, or at the bottom of Lake Ontario… scuba diving.