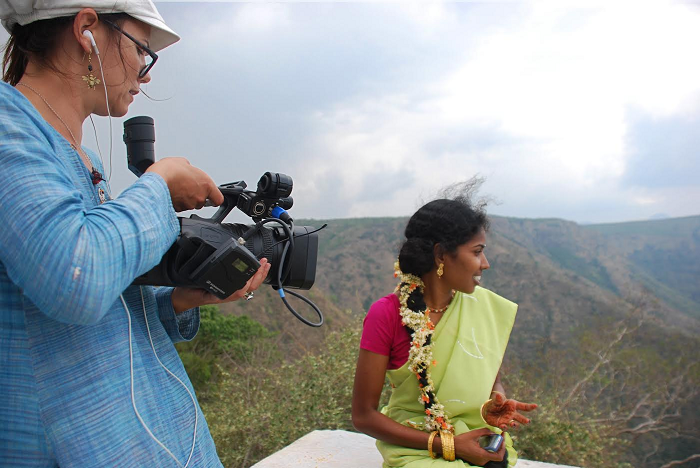 Elisa Paloschi is an award winning documentary filmmaker, producer and cinematographer. She is the President of Eyesfull, a Toronto-based, independent production company, dedicated to making non-fiction films with social relevance that reflect the diversity of the human voice.

With more than 25 years experience working in virtually every aspect of the documentary world, Elisa’s work has taken her around the globe, from Palermo Roma camps to deep under the Coral Sea of Australia. Her latest film Driving with Selvi (2015) premiered at the Raindance International Film Festival, London UK, won the “Truth to Power Award” for best documentary at Reel Asian International Film festival, Toronto, and was a top 10 Audience Favourites at IDFA (International Documentary Festival Amsterdam). Elisa’s penultimate feature documentary Embracing Voices (2012) explores depression and the creative process as seen through the eyes of Canadian Jazz luminary Jane Bunnett.

1.  You’re an LCVI alumni, who has amassed an impressive resume in the film industry. Tell us about yourself, your work and where you draw your inspiration from.

I grew up in Kingston and went to LCVI but was much more interested in learning about the world through travel than by sitting at a desk in class. So, in grade 12 I did some night-school and summer-school classes, and then moved over to Bayridge to finish grade 13 in a single semester. I really hated school, so when I look back now, I’m actually impressed by my determination to get school over with. While my graduation was taking place in Kingston, I was far away in Italy teaching English and working in an art studio.

I had just turned 18, and grew up so much in that first year in Italy. I was exposed to the world of politics and the arts, and community living. I met people from all over the world and from all walks of life, and many of my friends were much older than myself. It was here that I began using the camera as my tool of preference to observe the world. There has been no other point in my life where I’ve had such a personal and creative explosion, and I think there’s a little bit of that experience in everything I do today.

2.  At this year’s Kingston Canadian Film Festival (KCFF), you will be screening Driving With Selvi, an inspiring portrait and personal journey of South India’s first female taxi driver.  How did this film’s unique story come about?

When I went to India for the first time in 2004 I hadn’t made a film since I’d left Italy 10 years earlier. As a tourist though, I very quickly began to feel like I was only skimming the surface of this complex place, and my interactions with people were only superficial. I’m not interested in tourism for tourism sake, rather I like to observe and participate and try to understand what makes a person or a society what they are. Basically, I wanted to connect more deeply with the community, and that’s when I found and began volunteering at Odanadi an NGO that runs a shelter that assists girls and women who have faced gender-based violence.

I was instantly drawn to Selvi, one of 80 residents, who was 18 at the time and had recently run away from her child marriage. Her courage, strength, and drive to be an agent of change in her own life was remarkable. Here was a girl who had already faced unspeakable violence, yet she remained positive and hopeful. She inspired me to pick up my camera again (and again, and again).

I returned many times to India over the years to shoot, with each visit assuming it would be my last one. In retrospect I was naïve – because the healing I was privy to observe in Selvi doesn’t happen in a year. This is a film that follows the rhythms of Selvi’s life and it was her healing journey which dictated the pace and all the years required to bear witness to Selvi’s growth and transformation.

3.  Driving With Selvi is a truly original screenplay that underscores healing, empowerment and ultimately the resilience of the human spirit.  Why do you think this film has struck such a chord with audiences?

Selvi is such a spirited, joyful, insightful young woman who has overcome all odds, so it’s pretty hard not to fall in love with her, but I think timing of the film has been important.

On 1 January this year, the United Nations Sustainable Development Goals officially came into force. One of the 17 goals is to achieve gender equality and the empowerment of women and girls by 2030. In general as a society we are speaking out more than ever before about gender discrimination, especially in India.

The 2012 brutal gang rape in Delhi saw 23-year-old Jyoti Singh Pandey (Nirbhaya), become an international symbol of India’s misogynistic treatment of women and a tragic catalyst for a national movement.

Driving with Selvi is timely in its message and story, which adds to the public outcry against gender violence. The film explores gender discrimination, but in an observational way. There’s no force-feeding of the audience here. Rather, the film leaves the audience with many more questions than answers, but more importantly the story offers a glimmer of hope that change can happen.

4.  Your plans pertaining to a wider released, include unique screenings and audience engagements? Tell us more about what you have planned, and why this aspect of the film’s release is important to you?

Film has a powerful ability to inspire change, shift attitudes, and create social movements. I’ve been developing an ambitious audience engagement campaign which will build on the narrative of the documentary to support women and girls’ self-empowerment, and economic opportunity in the face of patriarchy in India.

We’re going to launch the “Get on the Bus” campaign with a ten-day bus tour across South India with Selvi at the wheel to take the film into local communities. We’ll bring survivors of gender violence together with key media, activists, educators, and other stakeholders to open dialogue about solutions. After that we aim to bring the film to one million people in communities where women are most at risk, to help shift attitudes towards child marriage, open dialogue about non-traditional livelihoods for women.

We will be working with organizations to build training programs in non-traditional career sectors such as cab driving and airplane mechanics. The purpose is to align the positive messaging delivered through film with a concrete platform to allow for education, hands-on training and ultimately career placement, along with entrepreneurial opportunities as part of a larger India wide social enterprise. In a few weeks, ITVS will be screening the film at the FLO festival in Mumbai, as the first of hundreds of screenings they’ll be doing across India.

My main focus right now is developing the right partnerships between the private and not-for profit sectors together with foundations, corporate social responsibility programs and philanthropists. Individuals can support the work we are doing in India here.

Selvi is also very committed to the campaign as she realizes she can make an important contribution to the way the world perceives and understands women’s challenges. She hopes that by telling her story, she will inspire others to find their voice.

5.  You and Selvi remain very close friends, and regarding your friendship, you’ve said that “I’ll always be part of her life, even long after the film is forgotten”.  How essential is that personal relationship to how you approach a project such as this?  Are such personal, long term ties common throughout your respective career as a film maker?

I’m a curious person, and when it comes to my films, I’m drawn to people who are in the process of facing their fears and challenging their demons. I’m interested in the story behind the way in which a person lives their life.

It’s an incredibly intimate process to dig in and learn about someone and to develop the trust necessary to share so openly. I’m uncomfortable with the one-sided relationship between filmmaker and subject, so I naturally share much more of myself than might be typical of many other filmmakers. Does this mean that the people I make films about stay in my life? Not always, but in a similar way that normal friendships shift over time.

6.  Looking ahead to this year’s Kingston Canadian Film Festival, what are your expectations? Aside from the screening your film and connecting with a new audience, what else are you looking forward to doing/seeing during your time back in Kingston?

My only expectation is that it will be freezing cold. I’ll be coming straight from India so I could be looking at a 50 degree drop in temperature.

The first thing I do every time I come to Kingston is pick up Happy, a local dog who’s like my own. I’ll probably make a trip to my favourite brunch place, drink coffee around friends’ tables, talk late into the night with my mother, and hopefully catch up on some much needed sleep on a fireside couch.

And I want to see films from the KCFF lineup! There are two in particular I don’t want to miss, both by Toronto colleagues, After The Last River and Sleeping Giant.