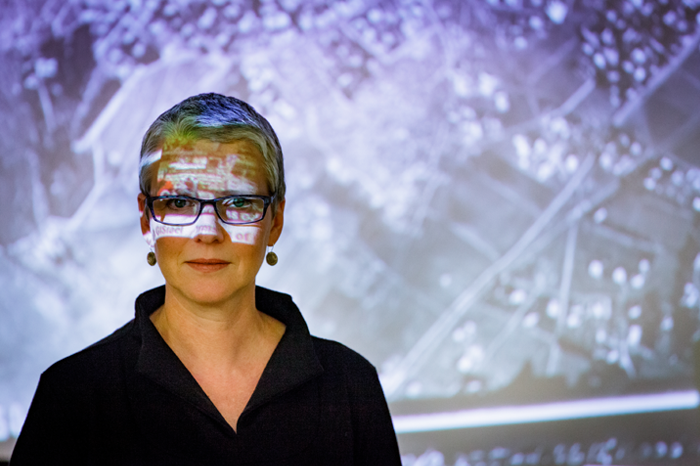 Dorit Naaman is a documentarist and film theorist from Jerusalem, and a professor of Film and Media and Cultural Studies at Queen’s University. In 2016 she released an innovative interactive documentary, Jerusalem, We Are Here, offering a model for digital witnessing. The project creates a novel platform that “will become a ‘go to’ reference for educators working on the intersections of new media, oral history, geography and more” (Liz Miller, documentary filmmaker). Jerusalem, We Are Here had its Canadian debut at the Montreal Documentary Film Festival in November 2016, will have its U.S. premiere in Berkley in February, its Jerusalem premiere in May, and the Palestinian one in July 2017.  Dorit’s publications focus on Israeli and to a lesser extent Palestinian cinemas and media (primarily from post-colonialist and feminist perspectives).

1. Tell us about yourself. How did you become a filmmaker as well as an educator specializing in film and media.

I was born in Jerusalem, and have been very outdoorsy as a child. I became a nature guide by the Dead Sea and started taking photography of nature quite seriously, but then, almost by a fluke, found myself on a film set for a couple of weeks, and I was completely hooked. I did a Bachelor of Fine Arts at Tel Aviv University, and by another fluke met the head of the film program at Syracuse University, so I applied to do an MFA in filmmaking. From there I moved to Edmonton and started a PhD in film theory at the Univeristy of Alberta. For a few years I mostly published on Israeli and to some extent Palestinian cinemas, and eventually found my way back to documentary filmmaking. I have been employed at Queen’s since 2002 and have had the pleasure to teach both production and criticism courses, as our BA uniquely offers a good balance of both.

2. Your latest film, Jerusalem, We Are Here, emerged as a result of your time living in the south-central Jersualem neighbourhood of Katamon. How did the area’s surroundings and community inspire this unique story?

In the early 2000s I read a memoir by a Palestinian law professor, Ghada Karmi, who was born in the neighborhood, and was expelled in 1948. I knew in general terms that Jerusalem’s old southern neighborhoods were “Arab” before 1948, but reading the book opened my eyes to the rich life that was abruptly halted by the war. In 2007 I was on sabbatical in Jerusalem, and I rented an apartment in the neighborhood, as I wanted to be close to my parents, who moved to the area from a different part of Jerusalem not long before. One day, the newspaper Ha’aretz had a long article about Palestinian homes in west Jerusalem, and the house next door was featured. It is a modest house (serves as a Canadian WIZO daycare centre), but it belonged to a prominent Palestinian intellectual, Khalil Sakakini. I then read a condensed version of Sakakini’s beautiful diary, and a memoir by his daughter, Hala Sakakini. At the end of the book there was a hand drawn map, produced from memory while in exile in Egypt. The map had the names of all the residents in the immediate few blocks around the Sakakini home. I then thought that it might be possible to find some of those families and work with them to bring their stories into a short video format. I had various plans for the shorts, but as a result of a long process with the participants, I realized that a virtual environment is most appropriate and effective to bring their stories to life.

3. Jerusalem, We Are Here is described as “an extraordinary interactive documentary that integrates a virtual walking tour” of the neighborhood and its former residents. Why was it important to you to give a voice to the families who were expelled from this neighbourhood?

As an Israeli I grew up knowing in only vague terms about the Palestinians history. [Similarly, as a Canadian I know very little about the Indigenous history of Kingston]. Most importantly, I was always told that the Palestinians fled in 1948, despite the Israeli pleas for them to stay put. This claim — with few exceptions — historically inaccurate. The Palestinians in Jerusalem were actively intimidated and forced out of their homes. I understand the strategic reasons for Israel’s policy (and it is important to note that the Jewish part of Jerusalem was under intense siege at the time), but historical fabrications lead to political disasters. Dealing with this buried past seems essential to me if we (Palestinians and Israelis) are to have a future in the region.

4. You’re previous DiaDocuMEntaRY series also highlighted the Palestinian-Israeli conflict. Furthermore, it set out to challenge the traditionally authoritative, omnipotent narrator, which is common to most documentary film making. What influenced your fresh take on how documentary films are presented?

Many documentaries still speak from a place of authority, whether by use of an unidentified narrator (through voice over), or by documentarists like Michael Moore or Morgan Spurlock, who admit their perspective, but dominate the ideological narrative of their films. The result is often reductive – not in content, as both make rich films – but in relying and entrenching one perspective, that of a while male American filmmaker. In the DiaDocuMEntaRY series I wanted to challenge the authoritative voice of documentary by making very personal and embodied short films that are not necessarily about myself. I wanted audiences to be aware that they are receiving information from one perspective, and to respond by what I consider a healthy mistrust, recognizing there could be other perspectives in telling the same story. This approach was at the core of the participatory structure of Jerusalem, We Are Here in that I wanted a jigsaw puzzle of voices, and not a linear, homogenous storyline.

5. As a full time professor at Queen’s teaching Film and Media, you’ve credited your department for supporting you  as you experimented with merging your theoretical interests and filmmaking background.  How did this support take shape, and what specifically has it allowed you to do as an artist and educator?

My colleagues at Queen’s Film and Media, the graduate students in Cultural Studies, and some members from other departments have been incredible interlocutors who helped me shape the ideas for the project, as well as lent an ear whenever I needed to brainstorm a problem, overcome a hurdle, or discuss the process. I had few role models when I set out to make this project, so the journey was long and with many twists and turns. My colleagues trusted me when I had no trust in myself, and were always there to support me with technical and conceptual advise. I am very lucky to have such an intellectual and creative community at Queen’s. My work operates within a Research-Creation framework, and I particularly benefited from conversations with artists who are PhD students in Cultural Studies, and who engage with similar pedagogic, methodological and ethical terrains.

6. Looking ahead to this year’s Kingston Canadian Film Festival (KCFF), how do you hope the audience will respond to your film? Aside from the screening of your film, what else are you looking forward to doing/seeing during this year’s festival?

The screening will be interesting to me, since it will start as a frontal screening in a theatre, but progress to more individual experiences navigating the project, and then a conversation about the varying experiences with different platforms.  I think that people can relate to this project in various ways, as this is not only a project about Jerusalem and that particular political conflict, but also about gentrification, urban growth and change, memories, nostalgia, and alternative approaches to communal mapping.

I am very much looking forward to seeing Angry Inuk and We Can’t Make the Same Mistake Twice, and to meet various filmmakers and media artists.