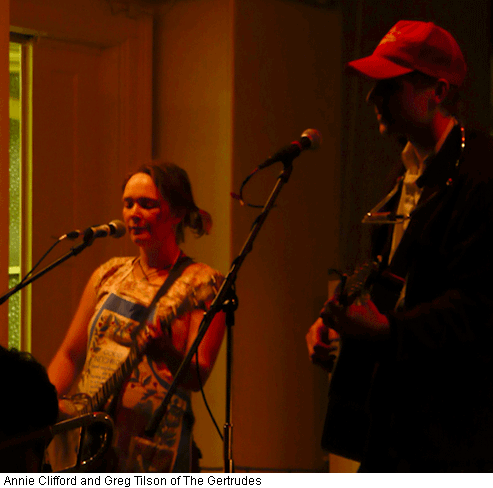 On Tuesday night I went to check out the Apple Crisp Music Series. Last week I told you a bit about this weekly concert series, held at Queen Street United Church. This past Tuesday was a special show because it was recorded for an episode of Bandwidth on CBC. The voice of Bandwidth, Alan Neal, was there hosting and getting the crowd to do its very best cheering – even if there was nothing to cheer about. Although I must say, that the whole evening was quite cheer-worthy. For $5 we were presented with 3 hours of great music by 4 bands (and close to twenty musicians).

The evening kicked off with a performance by the Gertrudes. If you read the Whig or are at all plugged into the Kingston music scene, you’ve probably heard of this up-and-coming-group of eight musicians. The band is made up of two guitars, bass, drums, banjo, piano, trombone and theramin. They have an EP coming out soon.

Following the Gertrudes were Emily Fennell and Luther Wright who played a mellow set compared to what we’re used to seeing them do in the local bars. It was a nice change of pace to hear them in a more intimate setting. Emily is also releasing a new CD very soon.

Chris Brown was next and played an eclectic mix of folky guitar tunes as well as some rockin’ ragtime piani and a really cool tune on the keyboard using an effects pedal. He was also amusing between songs and had the entire audience wish his mom good luck on her upcoming hip replacement. Nothing like having a crowd wish you well on the radio.

The final act of the evening was Old Man Ludecke. Originally from Toronto, this young old man (he turned 32 about two hours after the show) moved to the Yukon where he met his wife and took up the banjo. He writes witty, catchy, crowd pleasing tunes and in the opinion of us here at Kingstonist, has the best between song banter we’ve heard in a long time.

You can check out a few videos from the evening on our YouTube channel.

The show will become a part of a series that showcases the Kingston music scene, which Alan Neal has been working on since last summer. It is exciting to see this happening because there is music everywhere in this city, and it’s time to show the world that Kingston has more to offer than just The Tragically Hip. Although the Bandwidth air date has yet to be revealed, we’ll be sure to announce it and hopefully post links to the podcast.

In the meantime, be sure to check out the Apple Crisp Series, which goes on every Tuesday night. The brownies are equally as delicious as the apple crisp.

One thought on “Diggin’ in to the Apple Crisp”