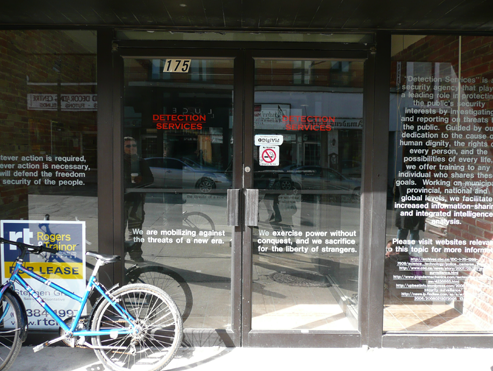 On a recent stroll down Kingston’s main drag, I was drawn towards a small crowd that was gathered in front of the old arcade, located just down from the corner of Princess and Montreal. Since the arcade closed it’s doors a few years ago, the space has served as a temporary exhibition venue, whereby local artisans have been permitted to display their works over the course of a weekend. Most recently, people are being drawn to the building, which is displaying a different message that’s centred around a new business called Detection Services. Complete with official signage, and a loudspeaker that spouts random security announcements, this unique installation has got people talking.

On the left most window of the would be storefront of Detection Services, the following text is displayed: “Now, in this century, the ideology of power and domination has appeared again, and seeks to gain the ultimate weapons of terror. Once again, this nation and all our friends are all that stand between a world at peace, and a world of chaos and constant alarm. Once again, we are called to defend the safety of our people, and the hopes of all mankind. And we accept this responsibility.” On the right hand side of the storefront is a complimentary description of Detection Services, which builds on the theme of terrorism, and world peace. It reads: “Detection Services is a security agency that plays a leading role in protecting the public’s security interests by investigating and reporting on threats to the public. Guided by our dedication to the cause of human dignity, the rights of every person, and the possibilities of every life, we offer training to any individual who shares these goals. Working on municipal, provincial, national and global levels, we facilitate increased information-sharing and integrated intelligence analysis. Please visit websites relevant to this topic for more information:”, which is followed by a list of very long domains no human could possibly remember. Unless you took a few pictures that is.

One of the domains links to a CBC podcast on universal surveillance, and the increasing role technology plays in monitoring the activities of normal citizens. In this clip, Kate Martin, director of the Washington-based Center for National Security Studies, argues that the law does not protect our privacy from intrusive information collecting, chiefly because the government deems national defence to be of greater importance. The establishment of Detection Services helps citizens realize that technology has bestowed seemingly unlimited power to our overlords, thereby making everyone a suspect of illegal activities, which Martin argues a waste of time, and resources.

Kingston may not be overly policed by the eye in the sky, but that’s not to say that there are a hefty amount of cameras lurking on most street corners. Paranoia aside, how many camera’s capture your image on a given day? Does the lack of privacy bother you, or do you take comfort in the fact that you are being protected from unknown evils? Be sure to check out this installation in person, drop us a comment, and peruse the Detection Services Flickr set.