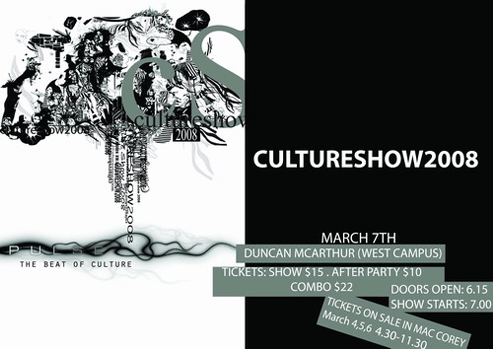 Culture Show 2008 is coming! The annual student-run initiative to promote cultural awareness across Queen’s University and the city of Kingston is being held on March 7 in Duncan McArthur Auditorium. It’s the only time all year that students and residents of Kingston can see belly dancing, kung-fu fighting, and a cultural fashion show all in one night. The best part? Half of the proceeds from the show go to a charity in the Kingston community.

The show brings together students from all faculties at Queen’s to participate in the annual event, though it is open to the entire Kingston community. Last year the show was sold out to a crowd of 700 and this year isn’t expected to be any different, so if you’re planning on attending, buy your tickets early. The show features music, dance, fashion, and a myriad of other cultural performances. It all starts at 6:15 and runs through until 9 o’clock.

Following the show, an after party is being held at Elixir Nightclub where one of Toronto’s best known DJs, Future Da Prince, will be spinning soca, reggae, and hip hop into the night. If that’s not enough for you, another fundraising concert is being held at Elixir on March 18th, where reggae and dancehall sensation Collie Buddz will be performing.

Tickets are $15 for the show and $10 for the after party, or $22 for the two bundled together. They can be purchased in Mac-Corry Hall at Queen’s from March 4th-6th from 11:30-4:30. If you’re unsure of where Duncan McArthur Auditorium or Mac-Corry Hall are, a map of Queen’s campus can be viewed here.