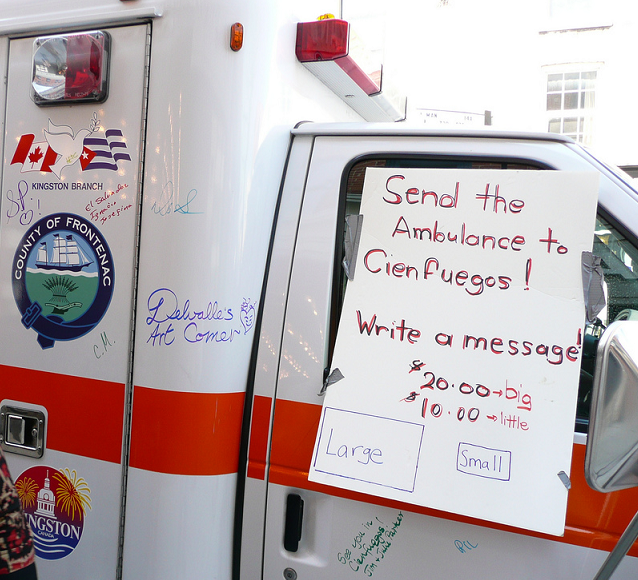 Thanks to the great weather this past weekend, much of my Saturday was spent working inside and out in the yard. When Sunday rolled around, my body rejected hard labour, so we decided to revive one of our favorite pastimes and go for a meandering stroll downtown. We browsed in numerous stores, including S&R, where the going out of business sale created a frenzy in the aisles and at the cash registers. When we retreated up Princess Street, we were attracted to the intoxicating  sound of a salsa band playing in the front lobby of The Grand Theatre.  Outside, Cubafest volunteers were taking up donations to help send an ambulance to Cienfuegos.

If the performance we stumbled across is any indication of what lies ahead for Cubafest Kingston, you need to make it out to their jam-packed week-long celebration.   From Monday to Wednesday, there are three nights of Cuban films showing at Time to Laugh.  Two-time Grammy Award nominee Jane Bunnett will perform at The Grand Theatre this Thursday, featuring new compositions from her Embracing Voices album and concert tour.  On Friday, a handful of cuban musicians will light up the Joy Supper Club with a fiesta that includes fine Cuban cuisine, as well as a cigar rolling demonstration.  The celebration wraps up next Saturday, where you can take in salsa dancing at Market Square, or go on the the rum and cigar cruise.  In addition, there are half a dozen galleries exhibiting the work of Cuban artists throughout the week.