When you think back on the local news stories and headlines that epitomize 2014 in Kingston, it’s impossible not to include the small part our city played in a major Hollywood production.  News of the production first surfaced online with an open casting call for local residents to come play a part in Crimson Peak, a feature horror film by acclaimed director Guillermo Del Toro.  Market Square and the surrounding streets where then very briefly transformed into a turn of the century marketplace, complete with horse-drawn carriages, dirt-topped streets and obligatory green screens.  Kingstonians flocked to take in the massive transformation and impressive set pieces, while others were on the look for the film’s A-list starts including: Mia Wasikowska, Jessica Chastain, Tom Hiddleston and Charlie Hunnam.

While we have to wait a while until Crimson Peak’s release just prior to Halloween 2015, the still images from the set proudly reinforce the fact that Kingston was a very suitable and picturesque host.  We can’t wait to pick out scenes and pour over the details of local landmarks that make it onto the silver screen when Crimson Peak is released next Fall.  With any luck, Kingston’s supporting role in 2014 will remind location scouts and filmmakers of our city’s tremendous potential and charm, leading to more opportunities in support of the big screen in the not too distant future.
—————————— 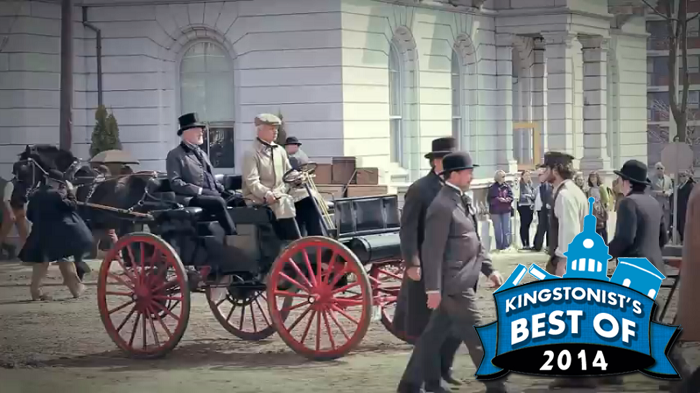 Downtown Kingston was abuzz with excitement during the second week of April when Market Square and the surrounding area were transformed for Guillermo Del Toro’s latest film, Crimson Peak. Garbage cans, mailboxes and benches were removed and replaced with old market carts filled with meat, produce and even live poultry. New signage was placed on nearby storefronts and the ground was completely covered with dirt, all to give the feel of an English town in 1901.

Locals were called upon to act as extras and onlookers came out in droves. It was truly an exciting and magical time to be in downtown Kingston.

While many folks, professional photographers and and cell phone photogs alike, took and posted many photos of the goings on, local filmmaker, Brad Smith, aka looktoaquarius, captured a behind-the-scenes look. His video illustrates not only the transformation of our downtown, but also gives insight into the plot of the film and the techniques used to create it.