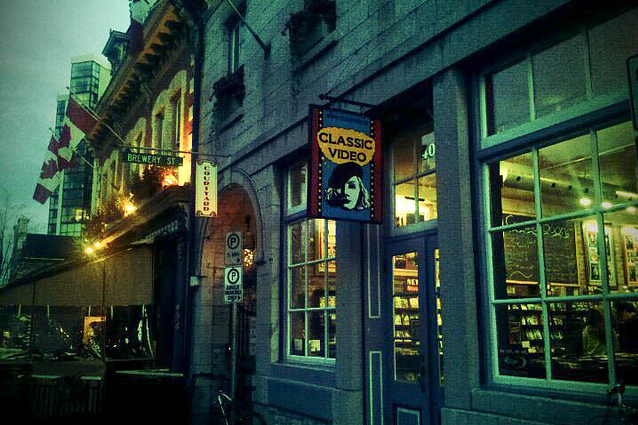 Stroll down Clarence Street on any given Friday night and know you are passing into a local hotspot and native entertainment history as you close in on Classic Video. The two-level rental store is nothing short of amazing with its endless shelves of flicks and new releases of every genre lined wall-to-wall. Yes – a local movie rental store has beat the odds of surviving against the digital movie revolution and Netflix generation.

It is no secret the once competitive national rental company Blockbuster was forced to shut their doors nationwide in 2011 after a longstanding war with digital downloads in Canada. Just drive down Queen Street and pass by the abandoned building once full of cars and a glowing blue sign. Of course, new – and very controversial – ownership of the U.S. Blockbuster chain also contributed to the mass shut-down to the popular rental shop, however it is now fact we can achieve immediate access to movies with digital devices and laptops – enabling us to shun the rental franchises and in essence, save money. Even Roger’s Video took themselves out of the rental business after monitoring a decline in movie rentals.

Programs like Netflix and Cogeco On Demand have eliminated the need to go out of your way and “rent” and are now booming in Canadian cities. Consumers essentially have a rental store at their own disposal and with most films, viewers can even sneak-peak the trailers while choosing a film – all without leaving the couch! These rivals put up a competitive barrier to stores such as Classic Video, surpassing the need for physical disks.

That being said, Classic Video is arguably more than just a rental haven. Perhaps being able to read about a film and imagine it is an experience on its own movie-watchers look forward too. Not to mention, Classic Video’s catalogue of movies is worth digging through and can be argued has a more impressive range of films than that on Canadian Netflix.

It is also nice to have movie experts share their own thoughts on films and give some insight before you pay a few bucks in the colourful shop. The folks at Classic Video have always been willing to give recommendations and reviews! Maybe the atmosphere and sheer history of Classic Video can keep the Kingston establishment in business. But will DVDs be around forever?

This then strays from a local conundrum to a global catastrophe for shop owners similar to Tom Ivison. DVDs have been around since the late ‘90s and we’ve all watched as online streaming effortlessly invades the internet and continues to hover above the cracks of legal restrictions. Only time will tell where the digital age will take us, and how that will translate at the local and global scale.

Thanks and credit to Dawn D for the photo displayed in support of today’s post.

3 thoughts on “For Rent”