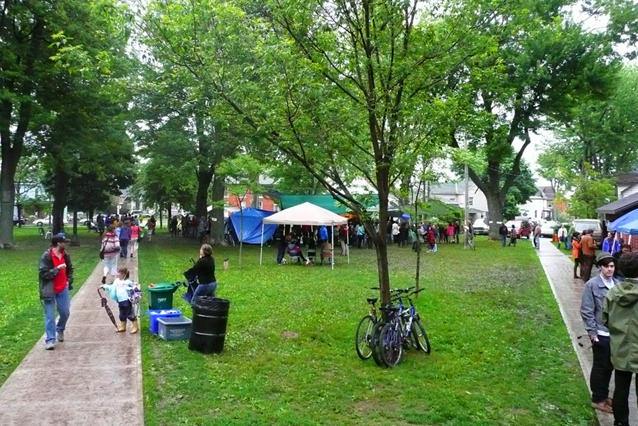 Summer brings loads of activities to Kingston, while City Park, Market Square and Confederation Park are not the only outdoor venues for fun and excitement.  From music festivals to buskers and their brand new basketball court, McBurney Park (aka Skeleton Park) is a secret garden that few tourists will ever discover.  This gritty greenspace is tucked away from the hustle and bustle of downtown, a few blocks north of Princess.  Six paths converge in the middle of the park, where a historical plaque is situated.  It reads:

A Garrison Burying Ground existed here by 1816 but, three years later, became a burial ground for Anglicans and Catholics.  Known by 1825 as the Common or Upper Burial Grounds, it was expanded to four acres to accommodate a section for Presbyterians.  Most Kingston families buried their dead here but, by the 1850s, it was at capacity.  The city’s dead were being buried in a new non-denominational cemetery at Cataraqui and in St Mary’s Catholic Cemetery, Kingston.  Closed in 1864 and increasingly neglected, the old burying grounds became a public disgrace and, in 1893, were converted into a city park. Many remains and markers were removed to St Mary’s and Cataraqui cemeteries, but the Barclay monument of 1826 was left in place.  Landscaped with trees and walkways, it was named Frontenac and now McBurney Park, but its informal name, Skeleton Park, is still in use.

The Landscape Renewal Plan for McBurney Park offers up considerably more historical information, including a detailed chronology of the transformation from graveyard to greenspace.  In that respect, when the decision to convert the Upper Burial Grounds into a park was made, bodies had to be relocated to other area cemeteries.  All told, the remains of approximately 540 people were removed, however over 10,000 Irish and Scottish immigrants may have been buried in the park.  Upon completion of the conversion, there were seven paths leading the to centre, while none of them were permitted to pass over suspected grave sites.  Even so, parts of Alma and Ordinance Street are suspected to have covered over some of the graves.

To this day, the grounds maintain a split personality, as it is known by several names.  As a cemetery, it was known as the Garrison Burying Ground, Upper Burial Grounds as well as the Commons.  As a park, it was originally named Frontenac Park after Count Frontenac who founded the famous Fort that also shares his namesake.  In the late 20th century, Frontenac Park was renamed McBurney Park after the Principal at Central Public School.  However, in the midst of this name game, locals have consistently referred to the park land as Skeleton Park, and a majority of survey respondents want to change the name to Skeleton Park.

No matter what you call it, the park is definitely on the upswing.  With the relatively new historical plaque, basketball court, and eventual implementation of additional items detailed in the renewal plan, today’s Skeleton Park is a safe place for families, recreation and the arts.