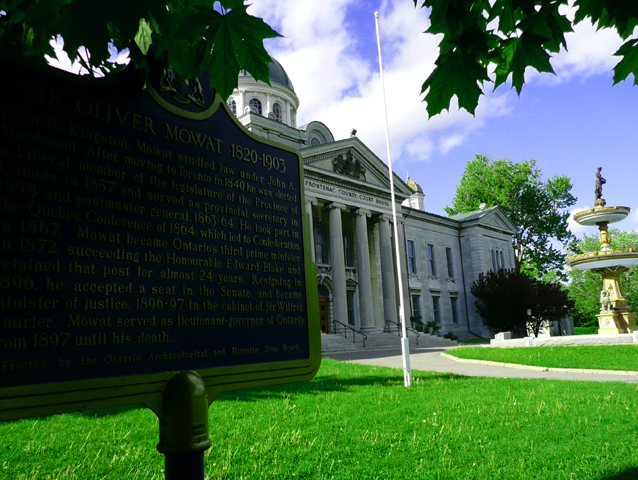 When it comes to famous Kingstonians, there is one name that is often cited at the top of everyone’s list.  There’s certainly good reason for this gentleman’s widespread notoriety, as his tremendous contributions to Canada earned him everlasting commemoration in Kingston in the form of numerous historical plaques, a statue in City Park, as well as his very own boulevard.  Sir John A. MacDonald may be more recognizable as a father of confederation, but to Kingstonians, he will forever remain a son of the Limestone City.  Today’s featured somebody is one degree of separation from Johnie Mac, as he was his protege who boasts an equally impressive resumé.

Steps away from the Frontenac County Court House, there a plaque that reads:

Sir Oliver Mowat (1820-1903) Born in Kingston, Mowat studied law under John A. MacDonald.  After moving to Toronto in 1840 he was elected a Liberal member of the legislature of the Province of Canada in 1857 and served as provincial secretary in 1858 and postmaster general, 1863-64.  He took part in the Quebec Conference of 1864, which led to Confederation in 1867.  Mowat became Ontario’s third prime minister in 1872, succeeding the Honourable Edward Blake, and retained that post for almost 24 years.  Resigning in 1896, he accepted a seat in the Senate, and became minister of Justice, 1896-97 in the cabinet of Sir Wilfred Laurier.  Mowat served as lieutenant-governor of Ontario from 1897 until his death.

After reading the plaque, I briefly misunderstood that Mowat was a Prime Minister of Canada, but this is not so.  I’m guessing that the title for provincial prime ministers was eventually replaced by today’s standard of Premier.  But again, only so much can be learned from the text on the plaque.  Library and Archives Canada offers additional insight as follows:

Given his acquaintances and circles, he should have been a member of the Conservative Party, but his mistrust of George-Étienne Cartier and, more so, of John A. Macdonald made him lean toward the reformers. Throughout his political career, he would advocate the principle of rep by pop.

Oliver Mowat sat in the Legislative Assembly as a reformer from 1858 to 1864. He was considered George Brown’s right-hand man in the Assembly. He was secretary of the province in the Brown-Dorion Cabinet of 1858 (which lasted only two days) and postmaster general in the Sandfield Macdonald-Dorion Cabinet from 1863 to 1864, as well as in the Great Coalition of 1864. In 1864, Oliver Mowat signed George Brown’s report on proposed changes to the Canadian political system.

Also in 1864, Oliver Mowat was appointed vice-chancellor of Ontario, an office he held until 1872 when he became premier of the province. He remained premier of Ontario until 1896, at which time he was named senator. He was minister of justice in Ottawa for one year, and in 1897, he was appointed lieutenant-governor of Ontario.

From this account, it seems as though Sir John A. MacDonald’s mentorship left a lasting impression, but it was not necessarily an amicable relationship. This brings up comparisons to Obi-Wan Kenobi and Anakin Skywalker, although Mowat shouldn’t be vilified for his affinity for reform. Check out some additional photos of the commemorative plaque, as well as the Frontenac County Court House on Kingstonist’s Flickr.