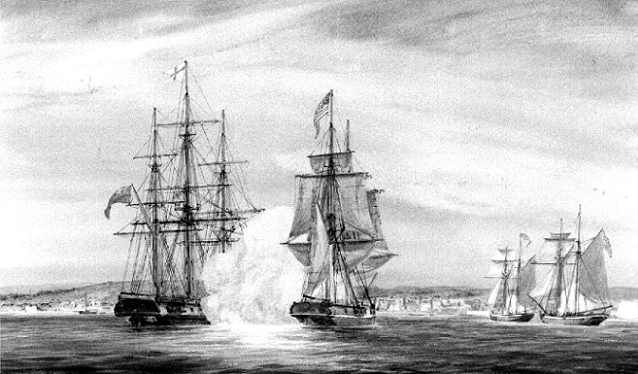 The Limestone City’s waterfront has a storied past, as it served as a strategic shipbuilding centre, and provided the backdrop for the tale of the Herchmer ghost.  But that’s just scratching the surface.  Today we’re advancing our exploration of Kingston’s historical shores by sailing back in time to recount the escape of the Royal George. If you exit Kingston via Bath Road and drive past Amherstview, you’ll eventually reach Finkle’s Point Park, where a historical plaque commemorates the interception, engagement, and successful defence of the British Corvette known as the Royal George.  The plaque reads:

Opposite here is the gap between Amherst Island and the eastern tip of Prince Edward County.  On November 9, 1812, the British corvette “Royal George” (22 guns), commanded by Commodore Hugh Earl(e), was intercepted off False Duck islands by an American fleet comprising seven ships under Commodore Isaac Chancey.  Pursued by the enemy, “Royal George” escaped through this gap into the Bay of Quinte’s North Channel.  The chase resumed in light winds the following day when she arrived safely in Kingston harbour.  Chauncey, intent on capturing the largest British warship then on Lake Ontario, attacked her in the harbour but after exchanging fire with Royal George and shore batteries, was forced to withdraw.

Unfortunately there’s only so much you can fit on these plaques.  The last two sentences are merely Coles Notes, as they are lackluster when it comes to delivering exciting details regarding the battle.  Thankfully, The Naval War of 1812 goes a bit more in depth, describing the battle in Kingston’s harbour as follows:

The American gunships Julia, Pert, Growler and Conquest opened the attack, cannons blazing on the solid batteries of Kingston to make way for the Oneida to enter the encounter. The Hamilton and the Tompkins arrived after the battle was underway. The skirmish lasted nearly two hours. Though the British troops in Kingston returned fire at the invaders, aboard the Oneida, Commodore Chauncy was able to sail in close. The vessel fired a blast at the Royal George, compelling her opponent, though of double her force, to cut her cables, run in, and tie herself to a wharf. Here she was under the protection of a large body of troops, and the Americans could not board her in face of the land-forces.

In closing, a few days following the attack, the local newspaper, The Kingston Gazette, ran a story describing the harrowing exchange.  Although it’s rather blasé in comparison to the last narrative, it does offer a different, albeit locally biased, view of the events concerning the Royal George.

Early on Tuesday morning last, information was conveyed to town that seven American vessels, full of men, were approaching. At day light the troops and militia were under arms, and detachments were immediately sent to occupy the different avenues to the town…should [the enemy] be disposed to land.  About two o’clock they approached the town and were fired at from all our Batteries. They kept up a brisk fire til after sunset…having done no other mischief than killing one man on board the Royal George.  Persons of every age flocked into town from every quarter, eager to repulse the invaders…