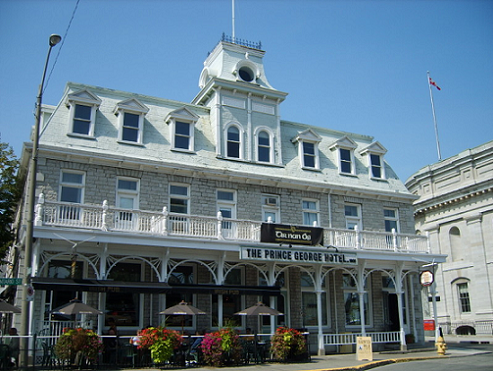 Bonjour mes amis. Happy Friday, and all that jazz. It’s been far too long since I gave you a dose of Kingston’s rich history, so today I’m coming back at ya with a story about the old Prince. Constructed in 1809, the Prince George Hotel has stood the test of time under the looming limestone of City Hall. There in the shadows, it originally operated as a modest hotel with a seedy back entrance that was commonly used by bootleggers during prohibition. Thanks to a number of distilleries and breweries operating in the area at the time, and Kingston’s standing as a busy port on the Great Lakes, many distributors took refuge in the Prince George before/after their deliveries. Interestingly enough, the greatest tale to come out of the old Prince is not related to contraband, but rather, it has to do with love, death, and ghostly apparitions.

There are actually two different tales explaining the how Lily Herchmer came to haunt the old Prince. The first story explains that Lily, the daughter of the builder and owner of the Prince George, fell in love with a sailor. Due to her family’s lofty stature, they did not approve of the relationship, thus the lovers devised a signal so that the sailor could safely visit when her parents were away. The story goes on to say that one fateful night Lily lit her signal lamp, fell asleep waiting for her beau, and was burned alive when the wind knocked over her fiery beacon. The less prevalent explanation for the Herchmer ghost describes a stormy night where she watched her lovers ship sink along Confederation Basin. Either way you slice it, nowadays many people claim that they have seen Lily sitting near an upstairs window, gazing out towards the harbor.

Historical records regarding the hotel are few and far between, but it’s safe to say that somewhere along the line it stopped offering temporary accommodations, and was bought by another one of Kingston’s well- to-do families. In recent times, the only hint of the original namesake is a sign on the building’s exterior, however the inside has remained true to the early days. The Tir na n’Og, Speckled Hen and Monte’s are the three watering holes located therein, which offer a mix of spirits, casual dining and live entertainment. In 1999 the old Prince stood proudly alongside City Hall, as a part of the backdrop for the made for TV movie Vendetta. This past year, the Springer Group erected a maze of scafolding around the structure, as a part of their efforts to repair and renovate the upper floors into loft-style apartments.

Have you ever seen the Herchmer ghost, or do you have a piece of the Prince George’s past that you want to share? If so, then we want to hear from you. In the words of Dexter Perkins, “history is a kind of introduction to more interesting people than we can possibly meet in our restricted lives; let us not neglect the opportunity.” With that in mind, until next time.