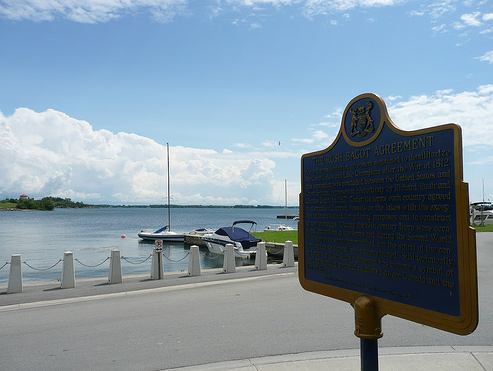 Rain, rain on my parade. I had originally intended on featuring ye olde Fort Henry in Vol IV, but Krista blew that one out of the water with her inaugural post, and so it was back to square one. Luckily there are a ridiculous number of historic plaques in the area surrounding the Fort, which made it pretty easy to find some solid successors. Just down the western slope of Fort Henry and across Navy Bay, is the Royal Military College of Canada (RMC) and the Stone Frigate. The Stone Frigate is a now used as a residence, however back in the day, it was used as a naval storehouse and an integral part of a wartime shipbuilding facility.

One of the oldest buildings on the RMC peninsula, the Stone Frigate was built early in the nineteenth century. The Brits had used Navy Bay as a government dockyard since 1783. Due to its’ location, it was a key strategic point for the British who had just signed a peace treaty with Uncle Sam after the American War of Independence. For the next fifteen years, some transport schooners were built, but the area was generally pretty quiet. However, with the onset of the War of 1812, activity on Navy Bay picked up considerably.

For the next three years, several warships were built at this location to defend the Dominion from American invasion via the Great Lakes; however Kingston was actually attacked only once. Following the war, in 1819, Captain Robert Barrie ordered the construction of a stone warehouse to store the ship parts and riggings that were dismantled following the Rush Bagot Agreement, which allowed only a few ships per side. The plaque commemorating this reads: “A naval arms limitation agreement negotiated to demilitarize the Great Lakes and Lake Champlain after the War of 1812, this convention was concluded between the United States and Great Britain, represented respectively by Richard Rush and Charles Bagot, in 1817. Under its terms each country agreed to dismantle all armed vessels on the lakes with the exception of four retained for policing purposes and to construct no new warships. During the 19th century there were occasional infractions of the terms and during the Second World War they were somewhat modified but the spirit of the convention has, in general, never been violated. Still technically in force, the Rush-Bagot Agreement has become a symbol of the long-standing, peaceful relations between Canada and the United States.”

So for the next sixty years, the Stone Frigate was used sporadically to house British soldiers, decaying ship parts and other equipment of the British Garrison Force that was posted to nearby Fort Henry. In 1870, when the British Garrison Forces left Canada, the Stone Frigate and other buildings were handed over to the newly created Canadian government. Just six years later, Kingston was chosen as the site for RMC, which was created to develop good Officers and civilians in Canadian society, which is the same goal that exists today.