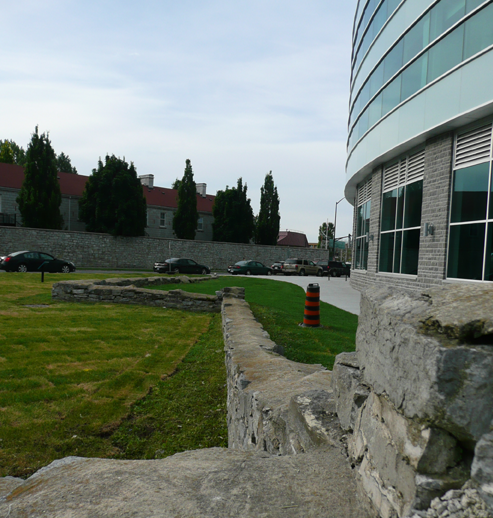 I’m back with the third installment of my mini history lesson, helping you to better understand the city we live in. Steps away from the controversial LVEC site, is a small, zigzagging strip of crumbling limestone, which looks like the remains of an ancient civilization. This structure “may” be part of the original facade of Fort Frontenac, which was constructed after the Governor of New France, the Comte de Frontenac, arrived at the mouth of the Cataraqui River. In 1956, The Kingston Historical Society erected a plaque to celebrate the landmark, which reads: Count Frontenac erected a Fort here in 1673 with LaSalle as Commandant. It was partially destroyed in 1758. In 1783 Major Ross built barracks (later called tete de pont) on the site. The original name was restored to the buildings opposite in 1938.”

Just how the original Fort met its demise is an interesting tale reminiscent of the Lord of the Rings “Two Towers” episode. Sure there may not have been any dragons, wizards, or elves, and in this case the castle dwellers lost, but it’s interesting nonetheless. According to The Cataraqui Archaeological Research Foundation, during the Seven Year War (1756-1763), the French increased the size of the garrison, installed gun platforms on the ramparts, and added new barracks. Their efforts were useless, as a British force of 3000 men commanded by Lieutenant-Colonel Bradstreet assaulted the fort in August 1758. The vastly outnumbered French compliment of 110 men surrendered after three days, while the fort was ransacked, and left in shambles.

For the next 25 years, the abandoned Fort only received the occasional visit from Natives and independent fur traders. However, the usefulness of the Fort was once again realized as the British moved civilian and military establishments from American soil at the end of the American Revolution. Elements of the Fort were reestablished, while the main footprint was ultimately altered to accommodate Kingston’s master plan, which included box-like plots of land and roads. By today’s layout, the old Fort would have fallen right in the middle of Ontario Street, while the only existing wall points north east towards Place D’Armes.

Now that the LVEC is complete, it’s sad to see the state of disrepair of the old restored facade. Sure it’s meant to look like it’s weathered the sands of time, but it also looks as though Harvey Rosen drove a dump truck over it. A close inspection makes it seem as though construction equipment was placed on top of the wall, as tire treads once led to sections that had significantly more damage. I guess that’s the price we pay for progress, but is it really worth it? I honestly don’t think that future generations will be excited if they uncover a piece of the K-Rock Centre.