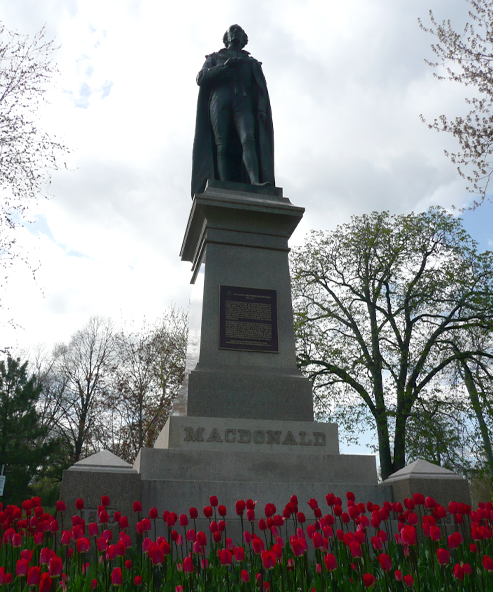 Over the last few months, Kingstonist.com has focused on current issues and events in and around the city. During that time a sizable number of visitors from outside of Kingston have written in to express how much they love the growing collection of images on our Flickr page. In order to showcase a bit more of what Kingston has to offer to these potential visitors, and provide long time residents with a slight refresher, I’ve been asked to write about various historical sites around “the stone”.

When I sat down to produce my first feature, I decided to write about none other than the Godfather of Kingston, the Grand Daddy of Canada, Sir John A. MacDonald. Johnny Mac had residences all over Kingston, many of which bare plaques that briefly detail how he lived, worked and played at a given address. Although all of these homes are historically significant, I was drawn away from them by the grandiose statue of Sir John A. on the corner of West and King, in City Park. The park is just steps away from the court house where Kingston’s most prominent criminal lawyer started to earn his reputation for greatness. Rather than bore you with a history lesson (that’s what Wikipedia is for), I’m offering you a convenient opportunity to read the plaque that lies at the base of this statue.

The inscription reads: Sir John Alexander MacDonald (1815-1891) First elected from Kingston to the Legislative Assembly of the Province of Canada in 1844, he was for forty-seven years a leading figure in the public life of his country. One of the Fathers of Confederation, he became the first Prime Minister of Canada and held the office 1867-73, 1878-91. Under his leadership the new Dominion was extended from sea to sea by incorporation of the territories of the Hudson’s Bay Company, British Columbia and Prince Edward Island, and linked together by the construction of the Intercolonial and Canadian Pacific Railways.