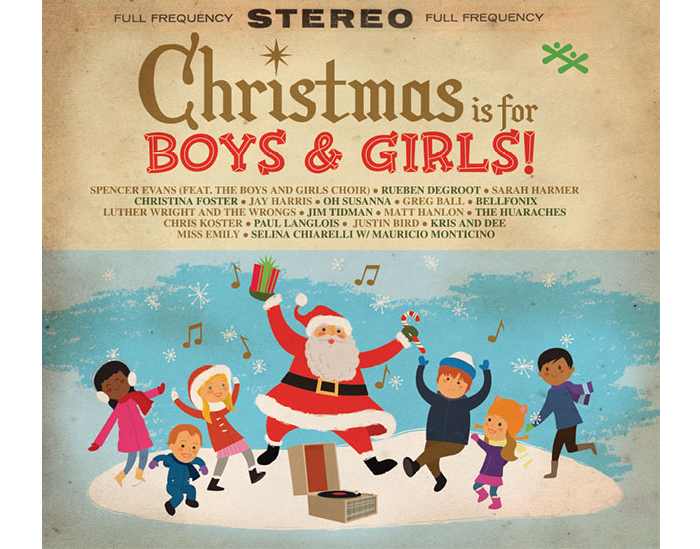 Aaron Holmberg has been active in the Kingston music scene for over fifteen years and during that time has had the opportunity to work with and get to know a wide variety of Kingston musicians. This, combined with his work as house engineer at the Tragically Hip’s Bathouse recording studio and at the Isabel Bader Centre, Holmberg has the experience and connections needed to create Kingston’s newest album: Christmas is for Boys and Girls. The idea to create a fundraising album was something he and friend Chris O’Connor had discussed in years past and this fall they decided to make it happen.

Choosing to support the Boys and Girls Club was a no-brainer. The club has recently expanded to include a west end location and works hard to help children “experience new opportunities, overcome barriers, build positive relationships and develop confidence and skills for life.” These skills and opportunities include a new music program that is currently being developed. The timing couldn’t have been better.

The album is an eclectic mix of traditional Christmas songs with a few newer tunes thrown in, and all performed by a diverse group of Kingston musicians. The eighteen track album includes performances by Luther Wright, Sarah Harmer, Justin Bird, Christina Foster, Miss Emily and Bellfonix, to name a few. The Boys and Girls Club Choir even had the opportunity to lend their voices to the album’s opening track performed by Spencer Evans.

Along with the hard work of these Kingston musicians, local businesses have also been an integral part of making this album come to life. Zane Whitfield’s North of Princess Studio was the main hub for most of the recording sessions and copies of the CD can be found in shops and restaurants all over town.

The album released this past Saturday at the tree lighting ceremony following the nighttime Santa Claus Parade, which included a float for the project and live musical performances. Christmas is for Boys and Girls can now be purchased for $15 at all three Canadian Tire locations, Tango Nuevo, Tara Foods, Pasta Genova, Chapters, Heather Haynes Gallery, The Annex Spa, The Mansion, Samatva Yoga, and at both Kingston Boys and Girls Club locations. It is also available for download on iTunes.

For more details about the project, be sure to visit www.christmasisforboysandgirls.com and check out the album’s Facebook page.