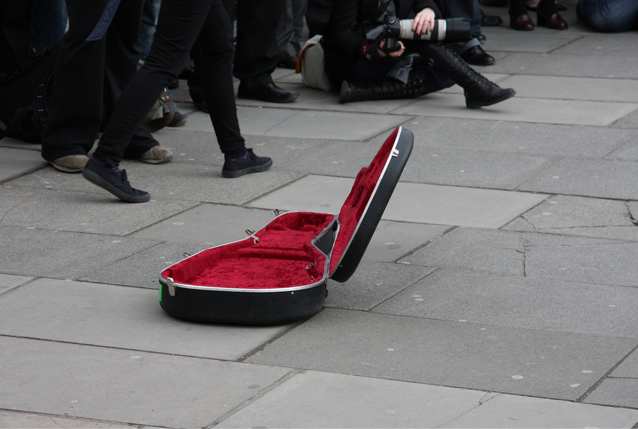 War Child Canada is a registered charity that provides urgent care to children in war torn countries around the world as well as raising awareness and advocating for children’s rights. In addition to the many companies that sponsor this endeavor, musicians all over Canada have been a huge source of raising funds and awareness for War Child with benefit concerts such as 2005’s Concert of Tsunami Relief in Vancouver and 2001’s Music Without Borders in Toronto. These concerts have included big name Canadian musicians such as Avril Lavigne, Billy Talent, Bruce Cockburn, Brian Adams, Feist, Kardinall Offishall, Metric and The Tragically Hip. This Saturday, October 17th, Kingston will host its own fundraiser entitled “Busking for Change”. The event is modeled after a similar benefit recently held in Toronto. Behind it all is Kingston’s own Emily Fennell.

Emily has become a well-known name in music in and around Kingston and after a recent tour of the west coast, is quickly becoming a name known across the country. You may know her from her regular Friday night show at The Merchant Tap House or perhaps you’ve seen her perform with her newest band, Sugarplum. When asked what inspired her to organize this event for War Child, Emily responded: ““We are fortunate to live in a country with opportunity! Such a small percentage of the world’s population has what they need for survival. We have all that and then some. We are part of the privileged few and it should be our duty to reach out to those less fortunate than ourselves.”

In order to help make this happen, Emily has rallied together seven Kingston bands to busk out front at the Grand Theatre from noon-4pm this Saturday. A portion of all proceeds will go to War Child Canada so be sure to come downtown for some great music and drop a few coins in the musicians’ guitar cases.

The schedule is as follows with intermittent performances by Emily herself:

Special thanks to Matthew Armstrong for use of his image portraying the international sign of the busking musician.

4 thoughts on “Busking for Change”