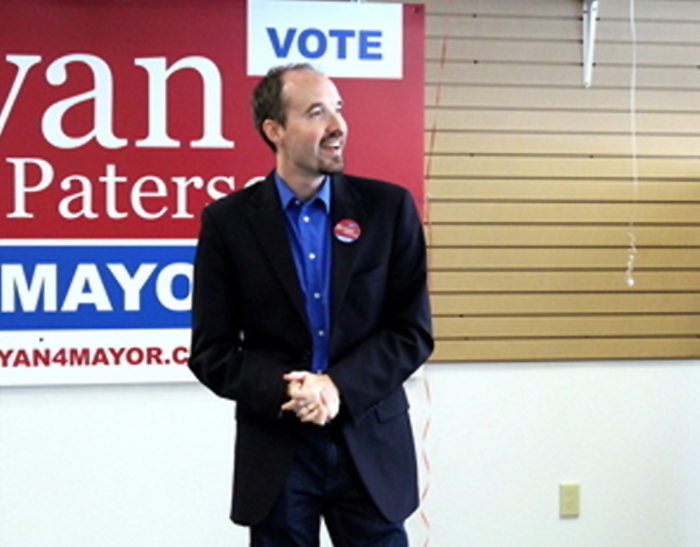 Bryan Paterson has served as the city councillor for Trillium District over the last four years. He first arrived in Kingston in the year 2000 as a graduate student at Queen’s University, while he is currently employed as a professor within the economic department at the Royal Military College of Canada. His contributions on the municipal stage include serving as chair of the city’s planning committee, vice-chair of the Mayor’s Task Force on Development, as well as a board member for both KEDCO and the downtown Kingston business association.  He is one of three Councillors who’ve opted to leave their post and vie for the mayoralty.

I am running for mayor because I believe that I have the vision, the background, the experience and the leadership skills for the job. As a trained economist with a PhD in Economics from Queen’s, I bring to the table the necessary skills and strategies to grow our local economy, to stimulate job creation, and to get maximum value from every tax dollar. My leadership style is based on a philosophy of respect – respect for those with different opinions, values and priorities than mine. This enables me to be a consensus builder and a team player.

I voted against the casino when it first came to council. I do believe that the potential benefits must be weighted against the potential social costs, and in this case I was primarily concerned with OLG’s plan to open up casinos all over the province, including Belleville, Peterborough and several more in or around the GTA region. The primary benefit of a casino is its potential to draw in tourists, but in this case I thought that the potential for this was limited because of all of these other casinos that would be opening at the same time. That being said, I supported council’s decision to put a referendum question on the casino on the ballot during this fall’s election, and I will respect and follow the wishes of Kingston residents on the casino – whether the answer is yes or no.

I think that it is critical that the city builds an effective communication strategy with the community as a whole. A strategy that ensures that not only is the city informing residents about what services and programs are available, but also ensures that residents can provide feedback as to what programs and services are working for them and which are not. A combination of townhall meetings, more use of social media and other communication tools are key.


KEDCO does an excellent job of working with existing businesses to help them grow and expand, which is an important engine for job creation. I do think that more can be done in regards to attracting new businesses, and I have suggested several policies that would help in this regard. First, we should concentrate on growing particular industries in which Kingston has a competitive advantage. For example, our strong public sector presence is an asset in growing private sector industries that work alongside the public sector (defence/ICT, health care etc) Also, we should make strategic investments in our infrastructure like the airport expansion that will enhance our tourism industry and provide the necessary transportation infrastructure that is a critical concern for new businesses.

I support a Third Crossing, not only because it will improve traffic flows across the city, but also because of the potential for redevelopment across the north end of the city along this new and improved east-west traffic corridor. The bridge is however a huge project that will require grant funding from both the provincial and federal levels of government. I have committed to getting the project shovel ready as soon as possible, and then to champion lobbying efforts with these other levels of government so that we can get this bridge built.

I will immediately focus on a plan to create jobs and grow our local economy. I will start immediate discussions with KEDCO and other key city departments and community stakeholders to work to implement the job creation strategies I have touched on above. But I will also meet with every member of council to ensure that we can develop a strategic plan that will touch on everyone’s priorities around the council table.