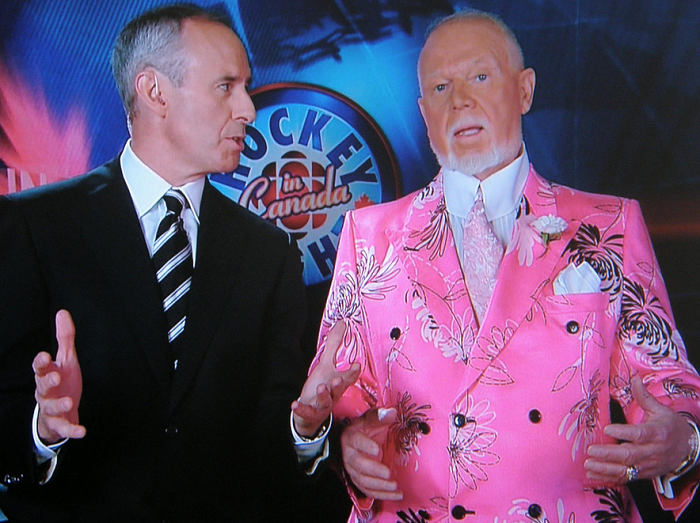 The push to immortalize Don Cherry in statue form is another step closer to fruition after a petition created by the group “Kingston Loves Grapes” reached its goal of 15 000 signatures over the weekend.  The discussion surrounding such a project has come up before and it seems that those who are passionate about it are not going to let it go anytime soon.  The group of Kingstonian Cherry fans has been working hard for almost ten years to gather the signatures of those in favour of celebrating the Coach’s Corner commentator.  Having finally reached their goal, KLG plans to present their proposal at tonight’s City Council meeting.

While many have shown opposition to the idea of a statue commemorating Cherry due to his sometimes controversial points of view, Ernest Truesdale, leader of KLG claims such an action is long overdue:

Don Cherry is the most famous person to come out of Kingston and he has done so much for the Canadian image and for the sport of hockey.  Who knows whether hockey would even be popular today if it wasn’t for his hard work rallying folks together to play and watch this great sport.

If Kingston Loves Grapes’ proposal is voted in tonight, the next steps will be deciding where the statue should reside and how large it should be.  According to Truesdale, many ideas are already floating around regarding possible locations and KLG intends to include these at tonight’s meeting:

Naturally, putting it somewhere near City Hall would be ideal.  I personally would love to see it in Confederation Basin, maybe next to the Sir John A. train or perhaps in front of the fountain.  Whatever is decided, I definitely feel the statue should be at least 8-10 feet tall.

A city councilor, who asked to remain anonymous, said that such a statue could cost the city upwards of $100 000, in which case council would budget for three times that amount.  If passed, that money would be taken from the city’s current pothole fund.

What do you think about the idea of the City of Kingston choosing to erect a statue of Don Cherry in the downtown core?  Is there someone else you would rather see immortalized in bronze?  I personally think a statue of Dan Aykroyd would be nice.

Thanks to Oldmaison for today’s pic.

One thought on “‘Kingston Loves Grapes’ Pushes for a Bronzed Don”