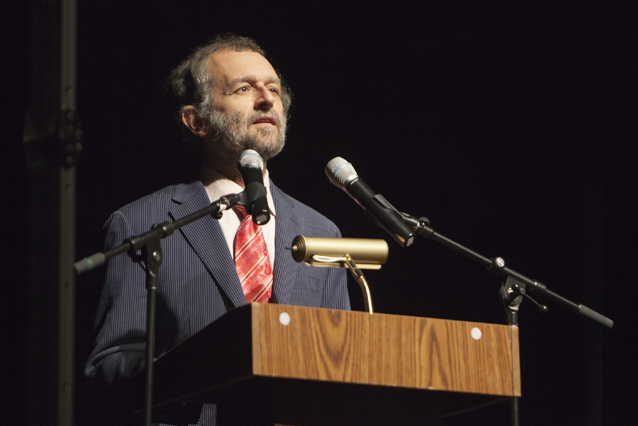 Blaine Allan is Associate Professor in the Department of Film and Media at Queen’s University. He has been the chair of the editorial board and managing editor of the Canadian Journal of Film Studies for more than ten years. Throughout his career, he has penned numerous historical examinations of Canadian films of the 1930s, focusing also on films by David Rimmer, Phillip Borsos and others, as well as US director Nicholas Ray. As the current chair of the Kingston Canadian Film Festival’s board, we were delighted to have an opportunity to connect with Blaine and learn about this year’s festival.

1. Tell us about yourself, your background with respect to film and how you came to be involved in the Kingston Canadian Film Festival?

I studied film at Queen’s in the 1970s, and I’ve taught in the Film and Media department since 1980. A number of the courses I teach and much of my research involves Canadian film and television, so it’s a pretty good fit for me to be involved with the Kingston Canadian Film Festival. The festival founder and then-chair of the board of directors, Alex Jansen, invited me to join the board a number of years ago, and when he stepped down I was happily roped into becoming chair, and I’ve done that since late 2010.

2. What makes the KCFF different from other film festivals? How has the festival changed in recent times, and what direction would you like to see the festival grow in the next 5-10 years?

It can sometimes seem that every community in Canada has a film festival of some type, and many of them give some space to domestic productions, but very few devote themselves exclusively to Canadian movies and filmmakers. It shows motion pictures from across the country, but it also pays attention to local moviemakers by showing their pictures and by providing workshops and other professionally educational events. As well, there’s plenty chance to socialize (or so I understand). Kingston’s festival is a comfortable size and well attended, so it’s a festival that the filmmakers like to attend—and to which they like to return, when the opportunity arises.

Over the past few years we’ve been increasingly successful at snagging titles that have already attracted attention and interest, like Incendies and Monsieur Lazhar. In the past, sometimes the timing didn’t work out, sometimes maybe the distributors didn’t see the KCFF as a prominent enough showcase, but that’s changed for the better, for us and for the movies, I think. The biggest recent change is the loss of the Capitol as a downtown cinema and as one of the festival’s venues. We’ve had to make adjustments, programming in the Baby Grand and the Time to Laugh Comedy Club, in order to keep as much activity as possible in an easily walkable area.

I’d like to see the festival continue to do what it does very well. Though I hope that it will continue to base itself downtown, but I also hope that we can attract even more viewers interested in Canada’s cinema than we already do from the wider reaches of Kingston and the region. I know they’re out there.

Oh, and if someone has bags of money and would like to buy a perfectly good historical cinema on Princess Street and make some affordable space for a plucky little film festival, we can talk.

3. As the Chair of the KCFF Board, what does your job entail? What were some of the challenges and headaches you had to face this year, and how did you overcome them?

First, I leave the organizing, programming, and other frontline responsibilities to the people who know what they’re doing, our staff, interns, and volunteers.

The board and I stay supportively behind the scenes. We’ll hear about problems and accomplishments, and we have the opportunity to respond or weigh in. For instance, this past year we discussed quite extensively the measures about new screening venues that the festival might have to take, and we’ll assess the results after the event is over.

Our responsibilities involve things like policy, the wider turns that the festival might make, and staffing the operation. This past year, for instance, we were happy to bring Marc Garniss aboard as the festival’s General Manager—he’s brought a wealth of experience in the local cultural scene, staging concerts and musical events in Kingston, experience that’s pretty directly applicable to a film festival.

4. Name three films you’re most excited about presenting to audiences at this year’s KCFF. Why you believe these films will be the talk of the festival?

Rebelle/War Witch. For the third time in three years a Canadian film’s been nominated for the Oscar for a feature made in a language other than English, and for the third time in three years the KCFF is showing it right around the time of the Academy Awards. I don’t think it’s treachery to admit I think Rebelle or any of the pictures other than Amour is a long shot, but I think a lot of festivalgoers will be marking this title.

I Declare War: Simply because Jason Lapeyre, the writer-director, was a student of ours at Queen’s Film. We showed his film Cold Blooded last year, and it was a pretty thrilling experience. Both the movie and the screening, which had to stop in mid-film when a member of the audience took a seizure. Not because of the film’s content, I believe, but I can’t be sure. (By the way, if that person sees this or hears about it, please get in touch. We wanted to contact you, but we couldn’t turn up a lead.)

All the Rest: There isn’t a movie called All the Rest. I just mean all the rest of the pictures showing over the weekend.

5. How many local filmmakers, or films with strong local ties can festival-goers expect to screen at this year’s KCFF? What do you think of the state of Kingston’s film scene, both in terms of audience interest and people making movies here?

The festival always invites local producers to submit short films, and this year about twenty were selected for screening. As well, there’s Jason’s feature, and I expect a number of people with local connections will turn up in the credits for this movie or that.

There are a number of people making movies in the area. It’s oddly pleasing to realize that while I know some of them personally, I don’t know them all. Years ago, I’d say, that wasn’t the case. But with the greater accessibility of cameras, editing facilities, and YouTube and other means of putting pictures in front of eyeballs, there are more and more people making movies, period.

Kingston has a wide range of moviegoers with comparably broad appetites and tastes. Good that the city has two big multiplexes, but not as good that they show the same movies, for the most part. Thank goodness for the Screening Room and for the KCFF, reelout, and other sites that provide alternatives and additional selection when the mainstream doesn’t completely satisfy.

6. Aside from this year’s spectacular lineup, which workshops, masterclasses or social event are you most excited about attending? Are there any discussion panels that you’re particular looking forward to?

The Michael McGowan discussion will be very interesting, because he’s a very accomplished filmmaker with a solid track record of feature films, but the masterclass with Sean Garrity and Jonas Chernick offers a chance to learn from people at a considerably earlier stage of their careers in making long-form films (though they’ve worked for years in shorts and other moviemaking endeavours), and the workshop on low-budget filmmaking probably addresses even more directly the situation of local filmmakers. We try to provide opportunities for different types of engagement, and this year’s slate of sessions does a pretty good job of it.