Nearly 140 years ago, Herman Brosius crafted this marvelous lithograph providing a birds-eye view of downtown Kingston.  Considering the fact that he was working without the aid of modern satellite imagery, nor did he have Google’s Streetview at his disposal, Brosius’ creation is all the more remarkable.  His representation of the city perfectly captures the fragmented grid structure of our downtown’s streets, which shoot off in odd directions around landmarks such as City Park and the Frontenac County Court House.  Princess Street also emerges as a prominent feature, stretching from the shore of Kingston’s harbour to the horizon on the top left segment of the map.  A rail line can also be easily spotted in the top right corner of the image, which crawls down past lower Princess Street to service the many industrial warfs dotting the shoreline.  My, how Kingston has changed over the past century and a half.  I wonder how the cities landscape will be transformed in 2015?

Kingstonist’s continued partnership with Queen’s Archives serves to highlight the city’s rich history and culture that is woven into the fabric of the local community.
—————————— 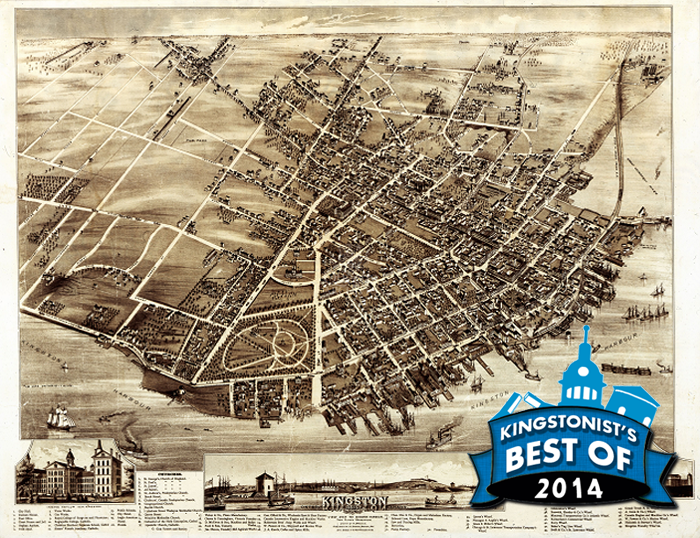 Well over a century before Google Earth and Google Maps allowed you to look down on your community, your neighbourhood, your street, your own (or a neighbour’s) back yard, one Herman Brosius, among others, enabled your great-great-grandparents to engage in something quite similar. That is, to gaze down from above, upon the community they resided in. The maps were non-photographic representations of cities known as perspective maps, aero views, or bird’s-eye views and were extremely popular in the nineteenth century.

A lithographer by trade, Brosius was active during the 1870s and into the mid 1880s, he authored a number of such views all over North America. Although his topography may have left something to be desired at times, over all, his lithographs are remarkable for their general accuracy, with individual buildings standing out distinctly, while architectural styles are easily discernible. One that clearly falls into this category is the “Bird’s-Eye View” of Kingston. Published in 1875, by Herman Brosius (he appears to have rendered 15 lithos of Ontario cities alone, between 1872-1876), it still possesses a fascination and reveals surprising insights to those who view it today. It remains a remarkable historical resource for those persons, across many disciplines, who wish to study and research this City’s rich past.