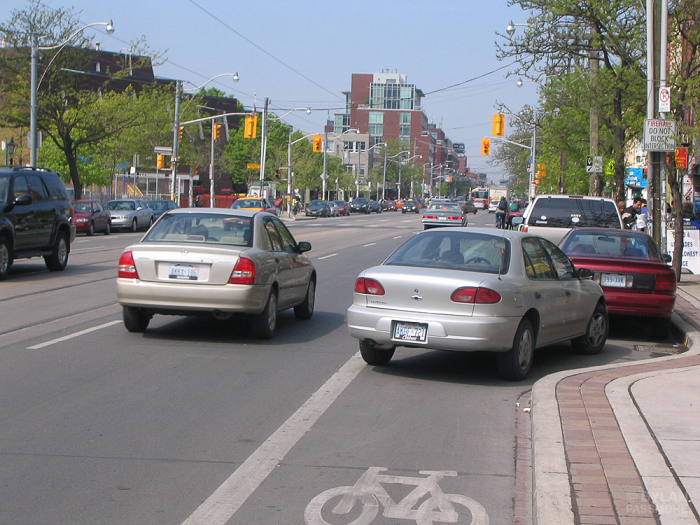 Kingston has invested both time and money to clear the way for bike lanes on select city streets.  The move has been met with cheers from long-suffering cyclists, and jeers from those who see them as either unnecessary or an obstacle to convenient parking.  In spite of the fact that bike lanes aren’t a totally new concept in Kingston, suffice it to say that both cyclists and those behind the wheels of motor vehicles are still getting used to them.

Most of us can likely recall close calls or instances where we’ve witnessed cyclists motoring along sidewalks when there’s a perfectly clear bike lane two feet away, unsafe riders swerving in and out lanes to avoid sewer grates and debris, as well as folks generally failing to follow the rules of the road.  On the flip side, on any given day you can expect to see cars and delivery vehicles crowding or otherwise fully parked in and obstructing bike lanes, and the precious few who fail to share the road and provide safe buffer for cyclists.  With such examples in mind, this week’s poll asks:

What should Kingston do to improve bike lane safety for cyclists?

In spite of the aforementioned problems involving cyclists and drivers, the majority of those on the roads and in bike lanes strive to be both respectful and safe.  Nevertheless, it probably wouldn’t hurt if more cyclists and drivers took the time to remind themselves of the rules of the road.  Ontario’s Ministry of Transportation offers a comprehensive Guide to Safe Cycling, which details everything from riding in traffic to dealing with obstacles and different surfaces and legal references.  Beyond reminding ourselves of best practices, it’s also worth noting that Kingston isn’t the only community that has had to grapple with problems stemming from bike lanes.  Cities such as Toronto and Ottawa have responded to longstanding issues by implementing separated bike lanes, which provide protective barriers (ie not just a painted line) between bike lanes and city streets. The resulting separated lanes reduce the chances of an accident and in most cases eliminate a driver’s the ability to block bike lanes with a parked vehicle.  Depending on their success, I think that a segregated scheme will become the inevitable next step in the evolution of Kingston’s bike lanes.

What are your observations of the relationship between drivers and cyclists in Kingston.  Based upon your experience, has safety improved or worsened with the increased number of people taking to bike lanes?  Better yet, what should we be doing to help ensure our roads and bike lanes are safe for all who need to use them?