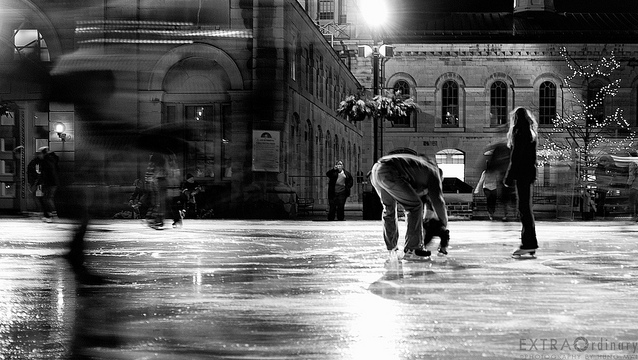 Exactly one month ago, Kingstonians were digging out from one of the biggest and nastiest snowfalls in recent history. Winter had arrived with a blustery and icy vengeance! Fast forward to today, exactly one month after Snowmageddon 2012, and the white, telltale signs of winter have all but vanished. While it’s been warm enough to melt almost every last determined snowflake, much to the chagrin of cross country skiers and snow ball hurlers, mother nature has at least blessed us with sufficient temperatures to support many of our outdoor skating rinks. That said, ice conditions haven’t been entirely stellar as they’ve suffered somewhat due to unseasonably warm conditions.  With FebFest set to take place this coming weekend, centred on the city’s crown jewel in terms of outdoor rinks, this week’s poll will crown:

The City of Kingston supports a grand total of 17 supervised, unsupervised and community skating rinks, all of which are maintained by teams of volunteers and city crews.  Mind you, not all of these rinks are created equal, as the ones we included in this week’s poll are arguably the most equipped, sporting features such as heated change facilities, washrooms, as well as larger skating areas, boards and nets for pickup games of shinny. The fact that many of these outdoor rinks are lit up to accommodate skating until 9pm, or later if you want to break the rules, also influences their popularity.

In spite of soaring demand, some would argue that our beloved outdoor rinks are on thin ice and in jeopardy of becoming relics of the past.  Research by the likes of McGill, Concordia, and the David Suzuki Foundation suggest that:

Many locations across the country have seen significant decreases in the length of the OSS [outdoor skating season], as measured by the number of cold winter days conducive to the creation of rink ice. This is particularly true across the Prairies, and in Southwest Canada, which showed the largest (and most statistically significant) decreases in the calculated OSS length between 1951 and 2005.

Furthermore, experts predict that unless we rein in greenhouse gas emissions, the next 20 to 30 years could spell the bitter end for outdoor skating rinks across Canada.   Just what would winter in the Limestone City look like without our vibrant outdoor rinks?  With fond memories of growing up and spending countless hours skating on a frozen pond, I honestly cannot imagine life without them.  What’s your plan for helping to ensure that your favourite rink stays in business long enough for the next generation to enjoy it?  Show some love for your favourite rinks and those who maintain them by sharing your thoughts with a comment or two.

Thanks to Hung Q. Mai for today’s photo, sourced from our spectacular Flickr pool.