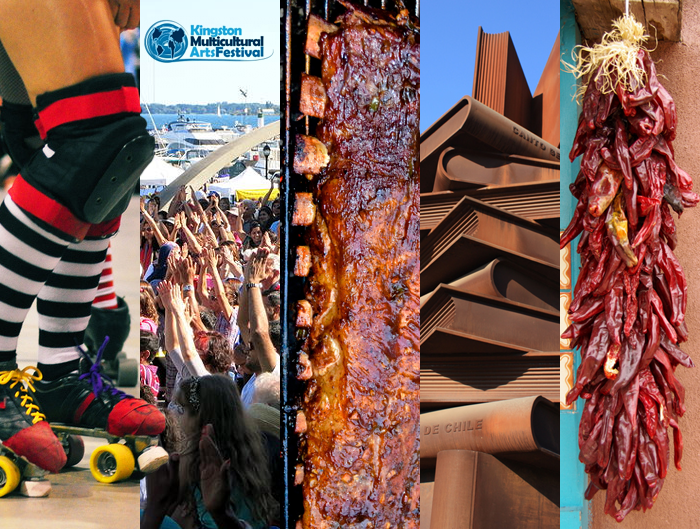 The final holidays of the Summer and the first day back in class are fast approaching.  Whether either of those milestones makes you cringe or cheer for joy, the arrival of September is truly something we can all look forward too.  Soon, the city will be buzzing with post-secondary students, and we will once again watch in awe as Kingston and the surrounding area undergoes its spectacularly colourful autumn transformation.  Fresh seasonal produce will shift to include crisp apples, hearty squash and pumpkin-spiced everything.  While the busy tourist season will soon fade in the rear view, there’s certainly no shortage of interesting things on the horizon.  Accordingly, we’ve once again sorted through the long list upcoming events and handpicked the best festivals, activities and attractions in Kingston in September 2015.

Kingston Derby Girls’ Season Finale, 5 September 2015:  we all love to hate season finales.  From Tony’s confusing demise at the end of the The Sopranos to nothing making sense at the end of Lost, all good things come to an end.  So too is the case with Kingston Derby Girls’ fifth season.  Over the past few months, we’ve eagerly crammed into the Memorial Centre to watch the Disloyalists, Skateful Dead as well as (new) Co-Ed and all-male teams duke it out in fierce flat track derby competitions.  With the 2015 season finale now upon us, we’re looking forward to big tilts between the Disloyalists and Guelph’s-own RCRG Brute-Leggers, followed by the Skateful Dead versus RCRG Killer Queens.  Join us as we cheer and shout throughout the epic conclusion to another year of sweet jams, teetering beer-amids and well-earned battle scars!

Kingston Multicultural Arts Festival, 6 September 2015: this celebration of diversity features dozens of Cultural Pavilions, each showcasing food, art and cultural activities from a host of regions around the world.  World music and dance performances on the main stage, located on the doorstep of City Hall, keep things lively and entertaining throughout the day.  Globetrotting visitors will make their way from one pavilion to the next, taking in special artistic workshops which provide opportunities to do everything from playing a musical instrument to learning a new dance style. The 6th annual Kingston Multicultural Arts Festival is both a free and family-friendly affair, while its popularity underscores the vibrant and vast arts and culture scene that’s alive and well in our city.

Kingston Ribfest & Craft Beer Show, 11-13 September 2015: the tasty return of ribs and craft beer to the Memorial Centre grounds is something I’ve been craving since bidding farewell to the event last year.  Celebrating their third anniversary, this succulent spectacular is proof that there’s a significant local appetite for award winning brisket, blooming onions, roasted corn and smoked ribs slathered in southern-inspired BBQ sauce.  The other half of the equation, for those who enjoy perfectly poured craft beer, is the presence of folk such as Mill Street, Big Rock, Railway City and Lake of Bays, who have made appearances in year’s past.  With enough down home fare to please the pickiest of eaters, and an impressive roster of craft beer brewers, its no wonder why this festival continues to be a widely anticipated bookend to summertime in Kingston.  Here’s hoping for some local breweries at this year’s event!

Kingston’s WritersFest, 23-27 Septebmer 2015: this first big event of Fall 2015 proudly caters to readers of every age and taste. WritersFest is a celebration of literature, which allows curious attendees to attend intimate and interactive discussions with notable authors, while this year’s impressive roster includes: Lawrence Hill, Wab Kinew, Patrick deWitt, Paula McLain, Jane Urquhart, Greg Hollingshead, Helen Humphreys, Olive Senior, Anakana Schofield, as well as Chefs Michael Smith and Jamie Kennedy. Aspiring writers may also attend workshops led by accomplished authors and professionals from within the literary profession. With book signings, food events and stuff for the kids, there truly is something for everyone at this festival. With Kingston WritersFest events already selling out, now’s the time to get your tickets and stimulate the imagination.

Chilifest, 26 September 2015: think you’re culinary skills have what it takes to capture the hearts and tastebuds of Kingston’s chili-seeking masses?  This fiery cook-off pits local organizations, businesses and restaurant chefs against one another as they compete for coveted titles ranging from Best Ethnic to Best Vegetarian, and Best Family Style to People’s Choice.  Chilifest prominently features a lot of entertaining showmanship from the respective cooks, but it also offers an impressive Children’s Activity Area, and Horse-drawn Wagon Rides.  Last year’s hugely successful event raised a whopping $44,000, while all of the proceeds were donated to Hospice Kingston.  This year, advance tickets will run you $10 per adult, $6 per child (kids under 6 eat for free) and $27 per family (2 adults and 2 kids), which makes Chilifest an absolute steal of a deal.  The only question is: can you handle the heat?