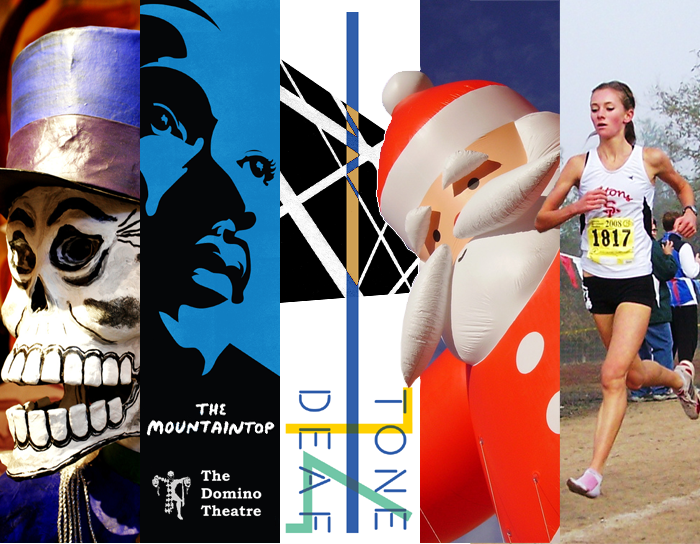 Thanks to the conclusion of daylight savings, this weekend we can either choose to gain an hour of sleep, or stay out a bit later than we should.  Ah, the Halloween shenanigans that will ensue… As we look beyond ‘falling back’, there are colder temperatures, snow banks and higher heating bills coming to a cozy living room near you.  November enjoys a similar reputation to March in that it’s a month where anything can go down, weather-wise.  If all goes well, we’ll be spared from shoveling, but rest assured the threat of snowmaggedon lurks just around the corner.  Although it’s too early to tell whether or not the second last month of 2015 will be kind, we are able to predict the best things to see and do.  Read on as we explore the top five events in Kingston in November 2015!

Dia de los Muertos Festival, 1 November 2015:  originating from the indigenous culture of Mexico, the Day of the Dead is a celebration honouring our ancestors and loved ones who have passed.  Kingston’s first-ever festival invites attendees to bring personal items, such as photo and flowers, to add to the community altar in memory of the departed.   This spirited event will also feature face painting, workshops, piñatas and musical performances by Quetzalcoatl Kingston, SamBatuKana, Los Paisanos, John Torres, Son Latino and the Kingston Drum Circle.  Dia de los Muertos Festival is a pay what you can, and will be hosted in the Malting Tower at the Tett Centre.

The Mountaintop, 1-15 November 2015: this critically acclaimed play written by Katori Hall premiered in 2009, and has since been performed on Broadway and attracted leading actors including Samuel L. Jackson and Angela Bassett.  The explosive narrative consists of an intelligent and imaginative interpretation of Dr. Martin Luther King Jr.’s last night on Earth.  Directed by Rebecca Benson, this production stars Stratford Festival star Michael Blake and rising star Natasha Mumba.   The Mountaintop has a two-week run at the Domino Theatre, with tickets ranging from $19-29.

Nighttime Santa Parade, 21 November 2015:  as soon as the patio furniture and BBQs retire for the season, stores eagerly jump at the opportunity to start selling Christmas lights, trees, decor and so on.  Accordingly it’s often hard to get excited about the so-called “holiday season” in October or November for that matter.  Whatever your thoughts pertaining to early reminders about Christmas may be, Kingston’s one and only Santa Claus Parade falls late enough in the month that we can easily warm up to the idea.  The Parade itself is truly a community affair, with spirited floats convoying from Innovation Park to Market Square for the Annual Tree Lighting Ceremony.  Line the route early to ensure you get a great seat, and more importantly, be sure to bring a non-parishable food items for the Food Bank!

Canadian Cross Country Championships, 28 November 2015:  what better place to show off Kingston than from the rolling grounds overlooking the city near CFB Kingston and Fort Henry.  The picturesque site will serve as the backdrop for this year’s Canadian Cross Country Championships, which includes 8 different age groups ranging from junior to senior and community runners. The challenging courses consist of 2 and 2.5 kilometre looping tracks, which provide runners with numerous technical obstacles as well as perfect vantage points for spectators.  To help keep things moving along, onsite announcers provide updates and background information on the athletes throughout the races.  For more information and to register to compete, check out the XC website.