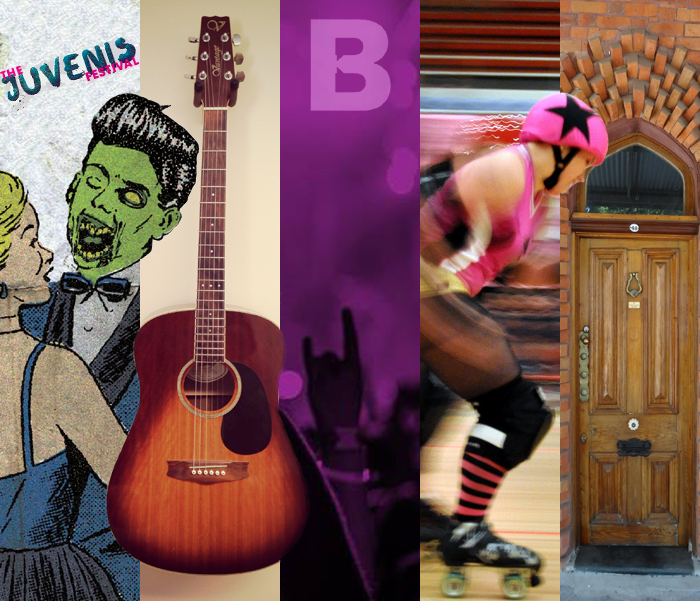 Spring is in the air in Kingston! The patios dotting our downtown are once again bustling with activity, weary students are shuffling into new digs, and the panic-inducing clouds of midges are choking anyone who dares to venture within 3 blocks of the waterfront.  With the city’s event calendar is chockablock with festivals, concerts, exhibits, exhibitions, tastings and the like, May is an undeniable sign of things to come as the busy summer tourist season approaches.  The tempo increases so much this month, that you couldn’t possibly take in all of the events we’ve hand picked for you to see and do.  After carefully coming over our community calendar, here are our top picks for the best events in Kingston in May 2017!

Juvenis Festival, 29 April-7 May 2017: Blue Canoe Productions’ The Juvenis Festival is a youth-led, not-for-profit, arts festival, which engages and showcases young artists and performers between the ages of 13 and 30. By creating a platform for up and coming artists to showcase their work, The Juvenis Festival enables the development of new local talent. This year’s program includes: Homeschooled: The Musical, Viva Voce: Good Vibrations, Storefront Art Gallery, the Musiikki Performance Series, Juvy’s Movies, The Poetry Show, Art at the Alibi, Zombie Prom: The Musical, Unfamiliar, Battle of the Bands, and Out of Sight, Out of Mind. Don’t miss this youth-led celebration of creative expression and performing arts!

Homegrown Live Music Festival, 6 May 2017: 2017 marks the 9th anniversary of the Homegrown Live Music Festival, a celebration of local music that benefits the Joe Chithalen Memorial Musical Instrument Lending Library aka Joe’s M.I.L.L.  The annual one-day music extravaganza takes over the city’s best known venues and stages for live music, which are temporarily dedicated to showcasing a specific musical genre. Homegrown Live 2017 features 13 different genres, from rock and folk to punk, blues and electroacoustic. With close to one hundred solo acts and groups taking to the stage for a really good cause, it’s no wonder Homegrown Live continues to be a huge hit for music lovers!

The Breakout Project, 10-13 May 2017: join thousands of innovators at Fort Henry for what is being billed as “Canada’s largest social innovation event”. The Breakout Project is part conference and part hackathon, where you’ll listen, learn, and get hands-on with projects that aspire to improve our community, society, and planet. Over the course of three days, startups, entrepreneurs and intrapreneurs will gather to watch and take part in kickstarting projects. Working around the clock, 10 teams will compete to raise human and financial capital and come up with a plan to move from ideation to completion in just one year.  As a part of The Breakout Project, the Sam Roberts Band will also play a free, open air concert in Market Square on May 12th at 8pm.

Kingston Derby Girls Home Opener, 13 May 2017: Rollerderby is back and this year’s home opener, Down N’ Derby, features the hometown Skateful Dead vs the Wellington Bloody Marys, followed by Kingston’s-own Disloyalists squaring off against Orangeville’s Pulp Affliction at The Memorial Centre. We’ll be sitting trackside for this double-headers, cheering on the high-speed action and epic spills, and helping to build the world’s largest beeramid with fellow derby enthusiasts.  Tickets continue to be a steal of a deal at $10 in advance or $15 at the door, while kids under 10 get in for free! Doors open at 5:30 and the first bout gets rolling at 6:30pm.  With only six home bouts scheduled for this season, now’s the time to call up some buds and say: “let’s all go to the derby!”

Music Lovers’ House Tour, May 27th 2017: The Kingston Symphony‘s Music Lovers’ House Tour is one of the most popular annual fundraisers for our local symphony orchestra. The tour gives passbook holders the opportunity to take a peek inside some of Kingston’s most beautiful, intriguing, quirky and historic homes. This year’s tour promises many points of interest with homes filled with art and other fascinating collections. Passbooks are available for purchase for $40 and are available at The Kingston Symphony Association (11 Princess St., suite 206), In Bloom (235 Gore Road), Expressions Fashion Boutique (2395 Princess Street) and Reid & Siemonsen Design Group (350 Bagot Street).  Lunch is provided at one of 3 churches on the tour: Trinity United Church, Elginburg Edith Rankin Memorial United Church, and St. Mary’s Parish Centre.