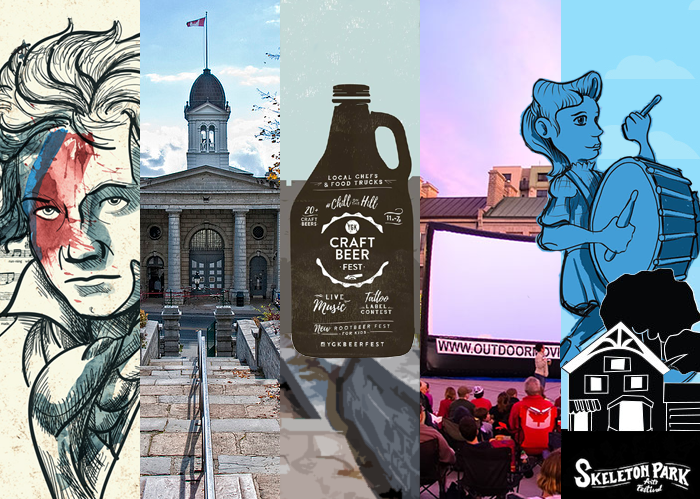 With the arrival of June, the end of another school year is in sight for elementary and secondary school students, and the latest phase of the Big Dig will soon be behind us.   While summer does not officially arrive until June 20th, Kingston has already begun to ratchet up the action in all corners of the city to entertain, educate, inspire and rejuvenate tourists and resident alike.  In typical fashion, we’ll soon see downtown Kingston come to life with outdoor music and movies aplenty, friendly athletic competitions, a flurry of lively festivals, packs of gourmet food trucks, and the list goes on.  Once again, we’ve poured over the long roster of activities to compile a shortlist of the best events in Kingston in June 2016.  Read on as we count down our top five things to see and do in and around the city this month.

Beat Beethoven, 5 June 2016: celebrating its 21st year, Beet Beethoven annually challenges participants of all ages and athletic abilities to compete in 4km and 8km races. The ultimate goal: to cross the finish line in front of City Hall before the Kingston Symphony has played the last note in Beethoven’s Symphony No. 5.  This significant annual fundraiser is a fantastic opportunity to support one of the city’s most treasured cultural resources, all the while getting just the right amount of sweaty.  For those who aren’t keen on running or walking, rest assured the concert in Confederation Basin is free! Don’t miss out on this final opportunity to see the symphony in action before next Fall.

Fort Henry’s Beerfest, 11 June 2016: come “chill on the hill” and celebrate the kick off to Ontario Craft Beer Week with mouthwatering offerings from more than 20 vendors.  With upwards of 2,000 thirsty attendees storming the Fort for past iterations of this festival, the 2016 version is being billed as a massive upgrade.  In addition to the 20 craft beer and cider producers, you’ll enjoy a newly released top secret beer, delicacies prepared by local chefs and food trucks, sweet sounds by a long list of performers and more.  The kids can also get in on the action with the newly added Rootbeer Fest.  Tickets for this event will go down just as easy as the stuff on tap, at $15 for adults, and $7 for kids; drinks and food not included.  For more details, check out the lineup here.

Kingston Penitentiary Tours, Mid-June to Early September: last month, Kingston’s MP and Mayor made an epic announcement that many had hoped for but few saw coming.  As a part of an ongoing visioning exercise for the shuttered Kingston Penitentiary, a municipal and federal partnership has been struck to re-open the notorious prison to the curious public.  With a growing number of Kingstonians in support of keeping the KP open year-round for guided tours, Summer 2016 will be a critical opportunity to convince stakeholders and shape the future of this attraction.  With guided tours scheduled for Tuesday through Sunday, you can bet online tickets will start selling out just as quickly as the last two times Canada was given the opportunity to look behind the walls and inside the cells of Kingston Pen.

Movies in the Square, 16 June to 1 September 2016: what could be better than sitting in the shadow of City Hall watching movies on the big screen on a starry summer night?  Nothing!  Add in your favourite people and a big bag of popcorn or a frozen treat from either the ice cream or gelato shop around the corner, and you’ve got one heck of a summer memory in the making.  Truthfully, the sight of hundreds of moviegoers comfortably lazing about in lawn chairs, transfixed on new and classic films projected onto a gigantic inflatable screen is something to behold.  And if the atmosphere and treats aren’t enough to entice you, the likes of Jurassic World, Finding Nemo and Up are sure to seal the deal.  Check out the full schedule for what will be screening (for free) throughout the summer: here.

The Skeleton Park Arts Festival, 22-26 June 2016: it’s hard to believe that Kingston’s annual summer solstice celebration is turning 11!  With a shift in focus back to a more grass-roots model, the 2016 festival is being co-presented by the Kingston Arts Council and the newly-formed Skeleton Park Arts organization.  Once again, McBurney Park (aka Skeleton Park) will be transformed into the festival’s central hub containing the main stage and art bazaar,  with various other venues in the neighborhood playing a supporting role.  This year’s lineup of local and notable performers includes: Sloan, David Francey, PS I Love You!, Jenny Whitely, Rueben deGroot, Rae Spoon, Lost Cousins, Sheesham & Lotus & Son, What Cheer? Brigade and more!  Check out the full details here.

For even more event listings in Kingston in June 2016, please check out our community events calendar. Want your event considered for a future top five? Be sure to add it to our calendar early enough for consideration.