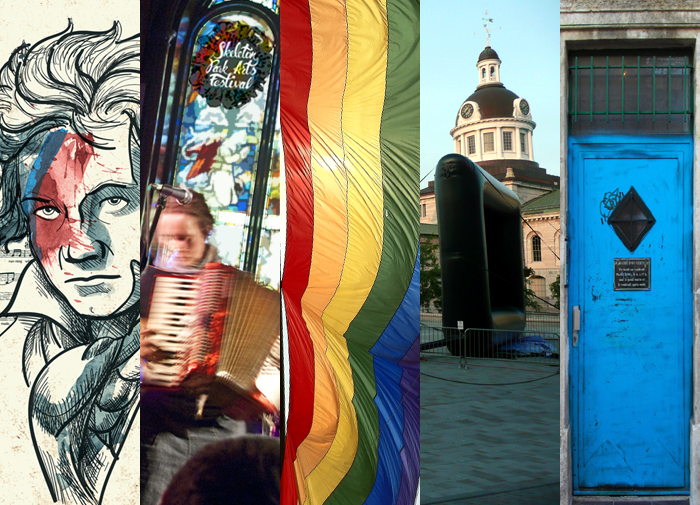 The patios are hopping, the gardens are blooming and the temperatures are steadily rising in our favour.  June is two days away, which means that the end of another school semester and glorious summer vacation are now in sight.   As we look forward to the summer solstice (aka the longest day of the year), we’re also eying the top five things to see and do around Kingston.  Check out the best festivals and activities Kingston has to offer in June 2015.

Beat Beethoven Run, 7 June 2015: celebrating its 20th anniversary, Beat Beethoven is an annual fun run, slash outdoor concert, slash fundraiser for the Kingston Symphony.  Participants are challenged to complete 4 and 8 km walking or running courses before the Kingston Symphony has finished playing 50 minutes of Beethoven’s Symphony No. 5.  This is a fantastic opportunity to get active while supporting and enjoying one of the city’s best cultural resources.  It’s also your last opportunity to hear the Symphony before the 2015/2016 season opener at The Isabel next September.


Skeleton Park Arts Festival, 12 to 21 June 2015: celebrating their 10th anniversary, this crowd favourite has blossomed from a one-day music festival to a ten day arts extravaganza. The outdoor music festival and arts bazaar in McBurney Park (aka Skeleton Park) continues to serve as a central attraction, while this year’s main stage will feature performances by Gary Rasberry, Oh Susanna and The Lemon Bucket Orchestra, just to name a few.  Other SPAF15 highlights include: Rockin’ the Square with P.S. I Love You and Hawksley Workman; film and musical performances at the Screening Room by Spencer Evans and Danielle Lennon; the Interact Juried Art Salon and more!  Check out the full details for free and ticketed festival events here.

Kingston Pride Parade, 13 June 2015: the 26th annual Pride Parade departs City Park at 1pm sharp and makes its way throughout downtown Kingston. While the Parade is one of the most talked about events that takes place during Pride, you can also celebrate the diversity of Kingston’s LGBTTIQQ2SA (Lesbian, Gay, Bisexual, Transsexual, Transgender, Intersex, Queer, Questioning, 2 Spirited, Allies) community by taking in the Village Fair, Chipped Off Theatre and the popular Out on the Queen boat cruise!

Movies in the Square, 18 June to 27 August 2015: kids big and small flock to Market Square at dusk to enjoy an outdoor cinematic experience complete with various temptations from the concession stand. The sight of hundreds of moviegoers comfortably lazing about in lawn chairs in the shadow of City Hall is truly remarkable and a telltale sign of summer in Kingston. If the atmosphere and treats aren’t enough to entice you, keep in mind this year’s lineup of films includes a mix of new faves ranging from The Lego Movie to Guardians of the Galaxy as well as old classics including Mary Poppins and The Little Mermaid.  Check out the full schedule for what will be screening throughout the summer: here.

Doors Open Kingston, 20 June 2015 (7pm-10pm): while many know that Kingston boasts some of the best freshwater sailing in the world (it hosted 1976 Olympic sailing events), you may be surprised to learn the city also offers the best freshwater shipwreck diving in the world. An estimated 400 shipwrecks – from schooners to steamships dating back to the 19th century – are believed to be lurking under the waves in the Kingston region.  These sorts of hidden and historically-significant gems are exactly what Doors Open attempts to provide a glimpse of.  Step foot inside the Bellevue House, KARC, Kingston Police Headquarters and many other sites that aren’t regularly open to the public.